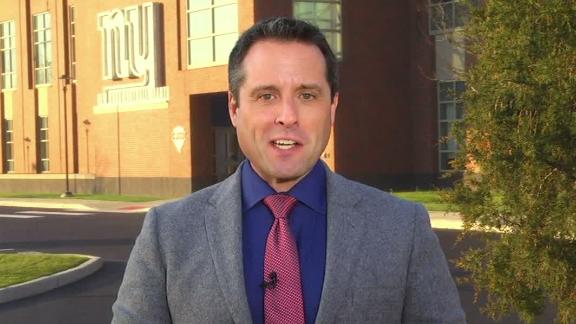 New York Giants defensive lineman Jason Pierre-Paul said he was originally told by emergency room doctors on July 4 that he would lose his entire right hand.

Pierre-Paul, in an interview with the New York Post published Sunday, described the events that unfolded after the fireworks accident that severely damaged his right hand.

Pierre-Paul said when he got to Jackson Memorial Hospital, he went to the emergency room, told the doctors not to cut his hand, then passed out. He said he was in and out of consciousness for a couple of days.

"It's easier to take a shortcut out. I knew for a fact that my hand ... I might say it's severely damaged or whatever, but I knew it wasn't that bad, like I can still play football," Pierre-Paul told the Post when asked why he asked doctors not to amputate the hand.

"Even the doctors counted me out. They were like, 'Yeah, we're gonna have to cut his whole hand off,' and, you know ..."

He said he relayed his wish before passing out, even after being told by doctors, "I don't think we'll be able to save it."

Said Pierre-Paul: "I knew that that wasn't the best hospital to be at."

Pierre-Paul told the Post that when the accident happened, he wasn't scared or in pain.

Pierre-Paul lost his right index finger and severely damaged other parts of his right hand in the accident. After nearly four months of recovery, he returned to the Giants at the end of October and signed a new deal through the end of the season.