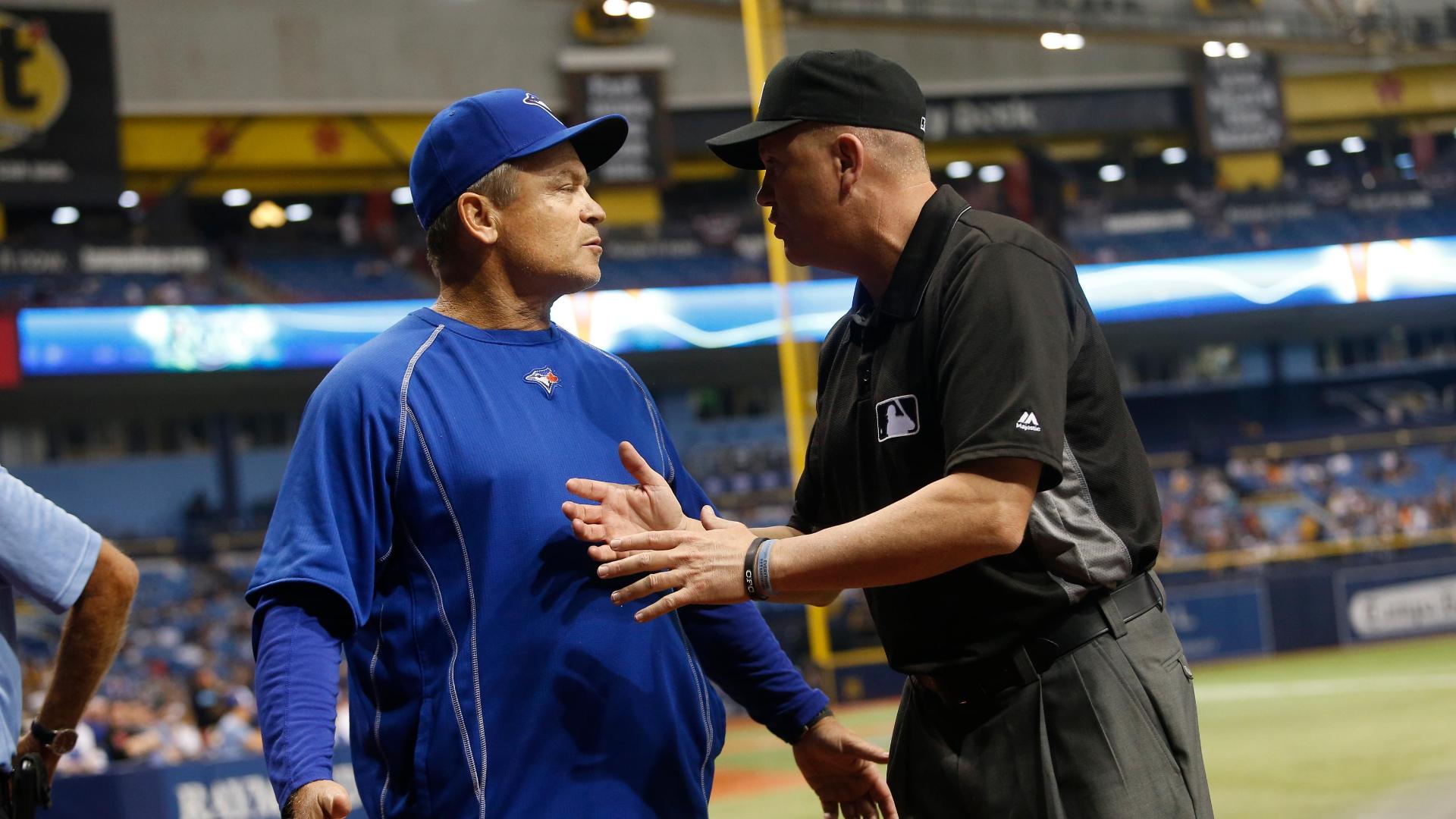 The recent change took all of three days to undoubtedly swing the outcome of a game this season, giving Logan Forsythe and the Tampa Bay Rays a 3-2 victory over Toronto that left Gibbons fuming.

On Wednesday, Gibbons said he was trying to inject some humor into a tense situation and had "no malicious intent" in his comment about dresses.

"I cannot understand how it would offend anybody, to be honest with you," Gibbons said before the game with the Rays. "It doesn't offend my mother, my daughter, my wife, who have a great understanding of life. I do think the world needs to lighten up a little bit.

"I know who I am,'' Gibbons said. "I know where my heart is. I show up every day and do the best job I can. Try to treat people the way I want to be treated, and I think for the most part I do that. But it amazes me in the world now how simple things, you try to calm things down, and it gets thrown out of whack.''

Gibbons said after the game he hoped the fact that the play ended the game will cause Major League Baseball to take a closer look at the rule.

"That's probably going to go down in history as the first one to end the game, and hopefully they'll look at that," he said, according to the Toronto Star. "I guarantee they were scared to death that would happen, and it happened."

With the bases loaded and one out in the ninth inning, Blue Jays slugger Edwin Encarnacion hit a grounder to third. After taking a throw from Evan Longoria for the force at second, Forsythe made an errant relay to first that appeared to allow the go-ahead run to score for Toronto.

"The rule's put in to protect players," Cash said, according to MLB.com. "You saw what happened last year in the playoffs. ... You know what, it is what it is. We're happy we won, but I can understand the frustration on the other side. We all deal with that a little bit in this game, and especially with the replay, what it's brought out."

Replay umpires in New York ruled Bautista's slide was not directly into the bag and it illegally hindered Forsythe. The call was changed to a game-ending double play that preserved Tampa Bay's victory.

"It turned the game into a joke," Gibbons said. "That's flat embarrassing. That cost us a chance to win a major league game."

Blue Jays center fielderKevin Pillarused Twitter to applaud Gibbons for his comments and to take a shot at "safety" being an impetus for the rule when the Jays are playing this week at Tropicana Field, a stadium that hasa small warning track. Pillar crashed headfirst into the outfield wall on Monday when he made a diving catch in the Blue Jays' 5-3 victory.

The call was overturned after a delay of 1 minute, 30 seconds. An announcement in the press box explained that the replay umpire definitively determined the runner violated rule 6.01 (j), that the runner's actions hindered and impeded the fielder. It also was determined that Bautista did not engage in a bona fide slide, as he did not attempt to remain on the base.

"I feel like I respect the rule, that it was an absolutely clean slide," Bautista said. "And it's just disappointing to lose a Major League Baseball game, with so much at stake every day here. We put a lot into the game since we were little kids and then to all of a sudden have everything taken away like that is just strange."

"It might be the first game that was a 'W' because of the double-play rule that's in effect," Forsythe said. "It was wild."

"I felt something on the slide," the second baseman added. "When I first saw him coming in, I thought he was going over the bag, but then I didn't know if he kicked his foot out to try and catch a back foot. He kind of swung me around a little bit, the throw went a little left."

Umpire crew chief Mike Everitt said to a pool reporter that he was told to limit his comments to what replay officials sent him. It was the same information announced in the press box.

"That's it," said Everitt, who declined to discuss the original call. "That's what we got. It went to replay and that's what it is." 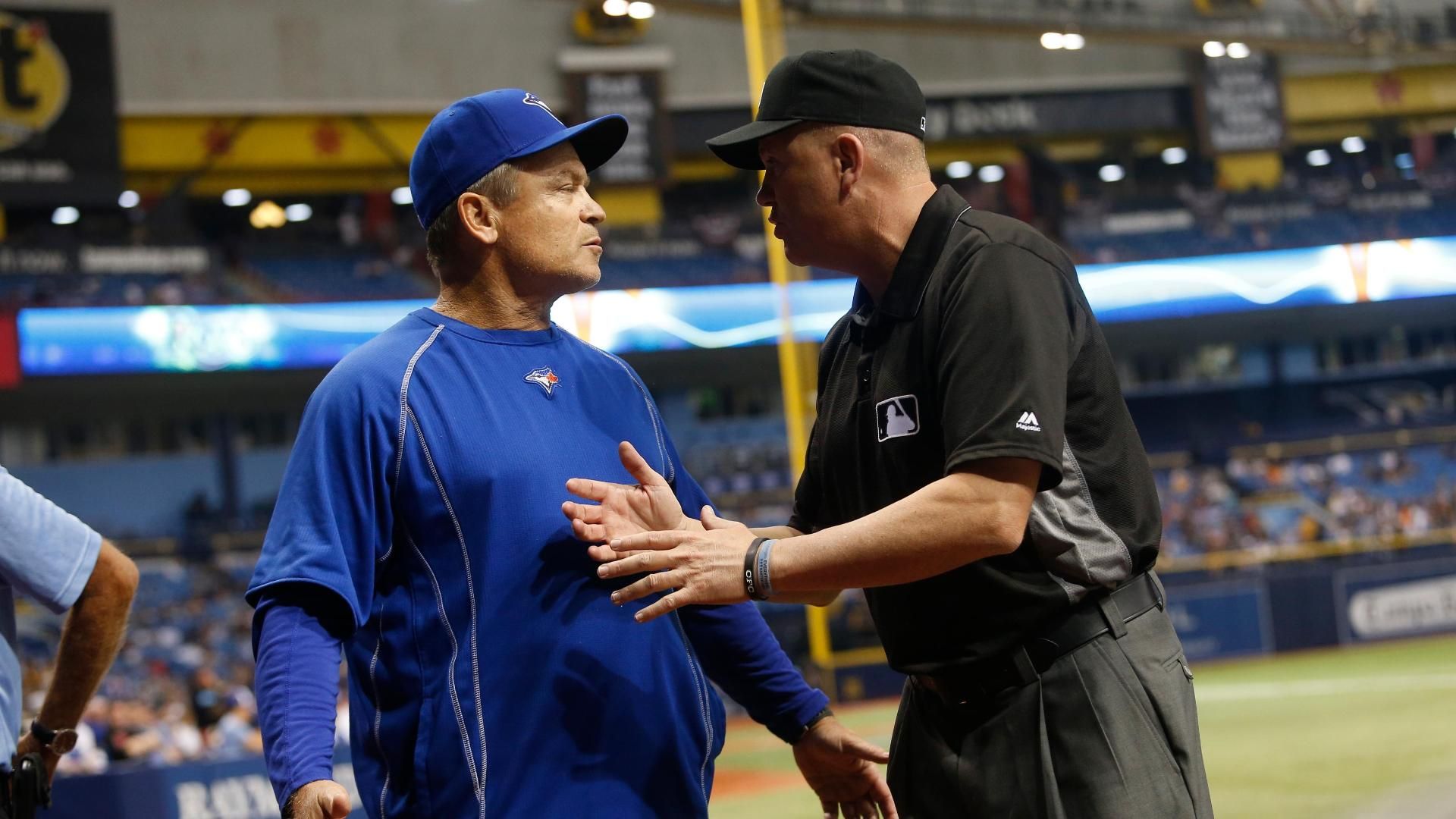