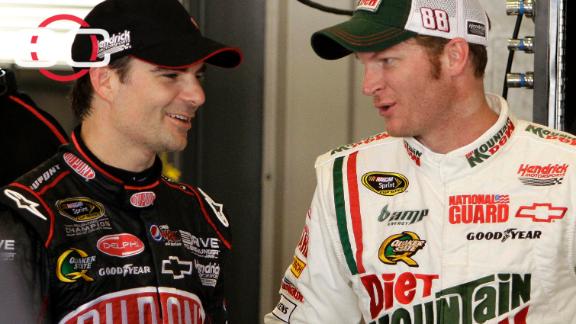 Jeff Gordon will return to Sprint Cup racing the next two weekends as he replaces Dale Earnhardt Jr., who will sit out with concussion-type symptoms.

Gordon's return isn't just a four-time champion coming out of "retirement" to race. Gordon, who never ruled out an occasional return when he stepped out of the Hendrick Motorsports No. 24 car at the end of the 2015 season, returns this weekend to the track in Indianapolis where he has won five times, including the inaugural Brickyard 400 in 1994.

Gordon will also race at Pocono Raceway on July 31, according to a statement from Hendrick Motorsports.

Gordon has attended all but a couple races this year, having spent the first 16 points races of the 2016 season as part of the three-man booth for the Fox Sports telecasts of Sprint Cup practices, qualifying and races.

"I think Jeff will do well," team owner Rick Hendrick said Sunday when talking about the possibility of Gordon's return. "He's won that race a lot of times.

"He's been out of the car this year. I expect if he gets in the car, he might be a little bit rusty, but we've got a lot of practice time and I don't think it'll take Gordon long to get back in the groove."

Whether Gordon continues in the seat remains to be determined. Hendrick said Sunday he hoped Gordon, an equity owner in Hendrick Motorsports, could do additional races, if needed.

Earnhardt said, in a recording he made Sunday night for his weekly podcast released Monday, that he was battling balance and nausea. It is possible the concussion symptoms are the result of crashes June 12 at Michigan and July 2 at Daytona. His ImPACT test, a cognitive examination that among other things tests memory and reaction time, showed results equal to his most recent baseline test, Earnhardt said.

Earnhardt missed two races in 2012 because of two concussions over a six-week span. "[My doctors] can give me a lot of exercises that retrain my brain to handle what I need to handle -- it's just going to take a lot of patience," Earnhardt said. "I take my health and quality of life as a top priority. ... I am going to take this slow and strictly take the advice of my doctors."

The return of Gordon, despite the circumstances, could give the Indianapolis race a boost. He moved to nearby Pittsboro at age 14 and is a favorite of the local fans.

"That's going to be really cool ... if we get to race Jeff one more time," three-time Cup champion Tony Stewart, who will retire from Cup racing after this season, said Sunday.

All of Gordon's previous starts have come in the No. 24 car, now driven by Chase Elliott. While Gordon will drive a No. 88 car at Indy, his longtime sponsor, Axalta, already was scheduled to be a sponsor of the Earnhardt car for Indianapolis. The company, formerly the DuPoint paint division, has a long association with Gordon and already had agreed to sponsor four of the next five races for the No. 88 car.

By missing Indianapolis, Earnhardt most likely will fall from 16th in the Chase-qualifying standings to outside the bubble to make the 16-driver Chase. He currently has a 14-point edge on Trevor Bayne for the final playoff spot.

There will be six regular-season races remaining after Indianapolis. If he returns during the regular-season portion of the schedule, Earnhardt would need a waiver from NASCAR (and it's expected he'd get one) to miss races and still be eligible for the Chase. The regular-season champion plus the next 15 drivers based on wins with points as the tiebreaker, make the Chase as long as a driver who wins is in the top-30 in the point standings. Earnhardt is winless this year.
Related topics:
sportsespndale earnhardt jrnascarjeff gordon
Copyright © 2021 ESPN Internet Ventures. All rights reserved.
More Videos
From CNN Newsource affiliates
TOP STORIES