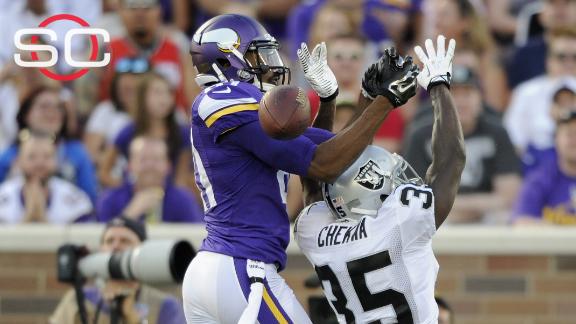 The Niners signed Simpson this offseason despite knowing a penalty could be coming.

"It's been a blessing to get back to playing football. I was off for a year," Simpson said. "I'm just blessed to be with this organization of people that stand behind me, really believe in Jerome Simpson. I'm just really committed to proving the people that are behind me right, that I can turn it around and be a success story and just prove people wrong and use my natural abilities to go out here and catch the football."

Simpson initially had been facing a 10-game suspension, but the ban was reduced to six games, a source told ESPN's Adam Schefter.

"Look, there's consequences to everything you do. Jerome was out of football for a year," coach Jim Tomsula said after practice Tuesday. "We know there were things in the past year, what he's doing now, he's doing everything we're asking him to do. He's on a good plan. He also understands there's no margin for error. I do believe in Jerome. And I think this is going to be a success story."

"Since joining the 49ers, Jerome has proven to be a great teammate," Niners general manager Trent Baalke said in a statement. "Although he will not be able to participate in the first six weeks of the season, Jerome has done everything asked of him, both on and off the field. We are in full support of the NFL's decision and look forward to Jerome's future contributions to our organization."

Simpson, who can participate in preseason practices and games, will be eligible to return to the Niners' active roster on Oct. 19.

The Niners' signing of Simpson in the first place raised eyebrows, considering his recent history.

Having already served a suspension for a marijuana-related arrest in 2011, Simpson was given a three-game suspension with the Minnesota Vikings for reckless driving to begin last season, and then was cited for misdemeanor charges of marijuana possession, driving with an open bottle and violating limited license restrictions; those charges stemmed from a July 2014 traffic stop.He was released by the Vikings and ultimately sat out the entire 2014 season.

"But the coaches here, ownership, they believed in me," Simpson said. "They did a background check. I came in for a workout, interview. I just put everything out on the table and told the truth. Just come here and work hard and just prove these guys right, that they did make a great decision."

Simpson caught two passes from Blaine Gabbert for 31 yards in the 49ers' 23-10 preseason-opening loss to the Houston Texans on Saturday. A second-round pick of the Cincinnati Bengals in 2008, Simpson has 145 catches for 2,004 yards and eight TDs in 57 career games.

ESPN's Adam Schefter and The Associated Press contributed to this report.