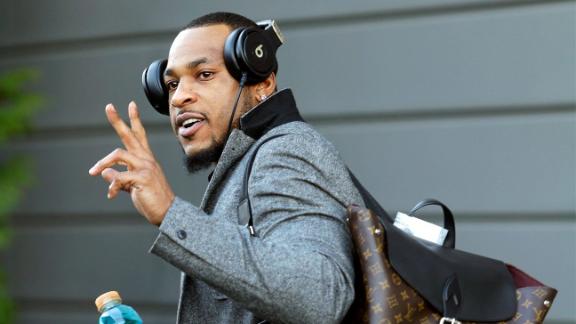 Seattle will receive a conditional draft pick in 2015, which will be either a fourth- or sixth-round selection, ESPN's Chris Mortensen reports.

"Percy is a versatile, dynamic player who has been productive on offense and special teams," Jets general manager John Idzik said in a statement Saturday. "We're excited about adding him to the Jets."

Harvin arrived in New Jersey on Saturday, at which point he underwent a physical.

"Although this was an extremely difficult decision, we are constantly evaluating our team and believe at this time, that this is in our best interest to move the team forward," Seahawks general manager John Schneider said in a statement. "We thank Percy for his efforts that contributed to a Super Bowl XLVIII victory and wish him well."

As for why Seattle traded Harvin, several sources confirmed to ESPN.com's Terry Blount that the team had grown tired of the receiver's act, believing he had become too much of a destructive force in the locker room. In addition, two team sources said Harvin had physical confrontations in the locker room with teammates, especially on the offensive side of the ball.

The Seattle Times reported that Harvin gaveGolden Tatea black eye prior to the Super Bowl and cutDoug Baldwin's chin during a fight this preseason.

The paper, citing a source, also reported that Harvin refused to go back into the game during the fourth quarter of last week's 30-23 loss to the Dallas Cowboys.

The 26-year-old Harvin has played in only 43 career games since being a first-round pick (22nd overall) by Minnesota in 2009. He was traded to the Seahawks in 2013, appearing in just one regular-season game because of hip surgery. But he had two rushes for 45 yards and ran back the second-half kickoff 87 yards for a touchdown in Seattle's 43-8 win over Denver in the Super Bowl.

Seattle acquired Harvin from the Vikings on March 11, 2013, in exchange for first- and seventh-round picks in 2013, and a third-round pick in 2014.The Seahawks then signed him to a six-year, $67 million contract, with $25.5 million guaranteed.

Harvin has battled a thigh injury and was listed as questionable for the Seahawks' game at St. Louis this weekend. The Seahawks have tried to find a variety of ways to use him in their offense as a runner, a receiver and on special teams, but injury woes slowed their plans.

This season, Harvin has 22 receptions for 133 yards, with 12 of those catches coming behind the line of scrimmage. He has only one catch on a ball thrown more than 10 yards, according to STATS. Harvin's average of 6.0 yards per catch is last among all wide receivers in the NFL averaging at least two receptions per game. He also has 11 runs for 92 yards and a touchdown and 12 kickoff returns for 283 yards.

New York's offense has struggled and the Jets have lost six straight since opening with a win over Oakland. Harvin figures to team with Eric Decker and Jeremy Kerley as the Jets' main weapons in a so-far weak passing game with Geno Smith at quarterback.

Unless there's a renegotiation, the Jets will pick up the remainder of Harvin's contract, which runs through 2018 for a total of $48.6 million. The remaining portion of his 2014 base salary ($7.1 million) is guaranteed, so the Jets are on the hook for that -- but there is no guaranteed money beyond this season. The Jets could cut him without cap implications if it doesn't work out.

To make room for Harvin, the Jets released wide receiver David Nelson. Nelson -- a former teammate of Harvin's at Florida -- started in Thursday night's loss to the New England Patriots and played 63 of 87 offensive snaps. For the season, he had eight catches for 65 yards, missing one game due to an ankle injury.

Idzik has come under fire for not spending money. Before the trade, the team had $20.7 million in cap space, second only to the Jacksonville Jaguars. Idzik is a former Seattle executive, and he negotiated the trade with his close friend, Schneider. Idzik had already left for the Jets when the Seahawks acquired Harvin.

Jets coach Rex Ryan mentioned Harvin in one of his early-season news conferences, calling him an "explosive guy" and a "pretty special" talent. Harvin's name came up in the context of a question about the possibility of the Jets incorporating the "jet sweep" into their offense.

The Jets were concerned about the lack of speed on offense. They went into the season thinking their two marquee additions, running back Chris Johnson and Decker, would provide big plays, but it hasn't worked out that way.

They haven't had a pass play longer than 51 yards, and there has been growing frustration among players and coaches that opposing defenses are overplaying the run because there are no weapons on the outside. The Jets are ranked 32nd in passing offense, averaging only 185 yards per game, virtually the same as the Seahawks (186 yards).

They also made the trade with the hope that Harvin's presence will help Smith, who has nine more games to prove he can be the long-term answer at quarterback. Smith has struggled in his second season, although he has shown some improvement the past two weeks.

Seahawks defensive endCliff Avriltook to Twitter to express his disappointment in the move.

Jets Give Up Conditional Pick For Harvin
ESPN senior NFL writer John Clayton discusses why the Seahawks traded wide receiver Percy Harvin to the Jets and the compensation New York will send to Seattle.