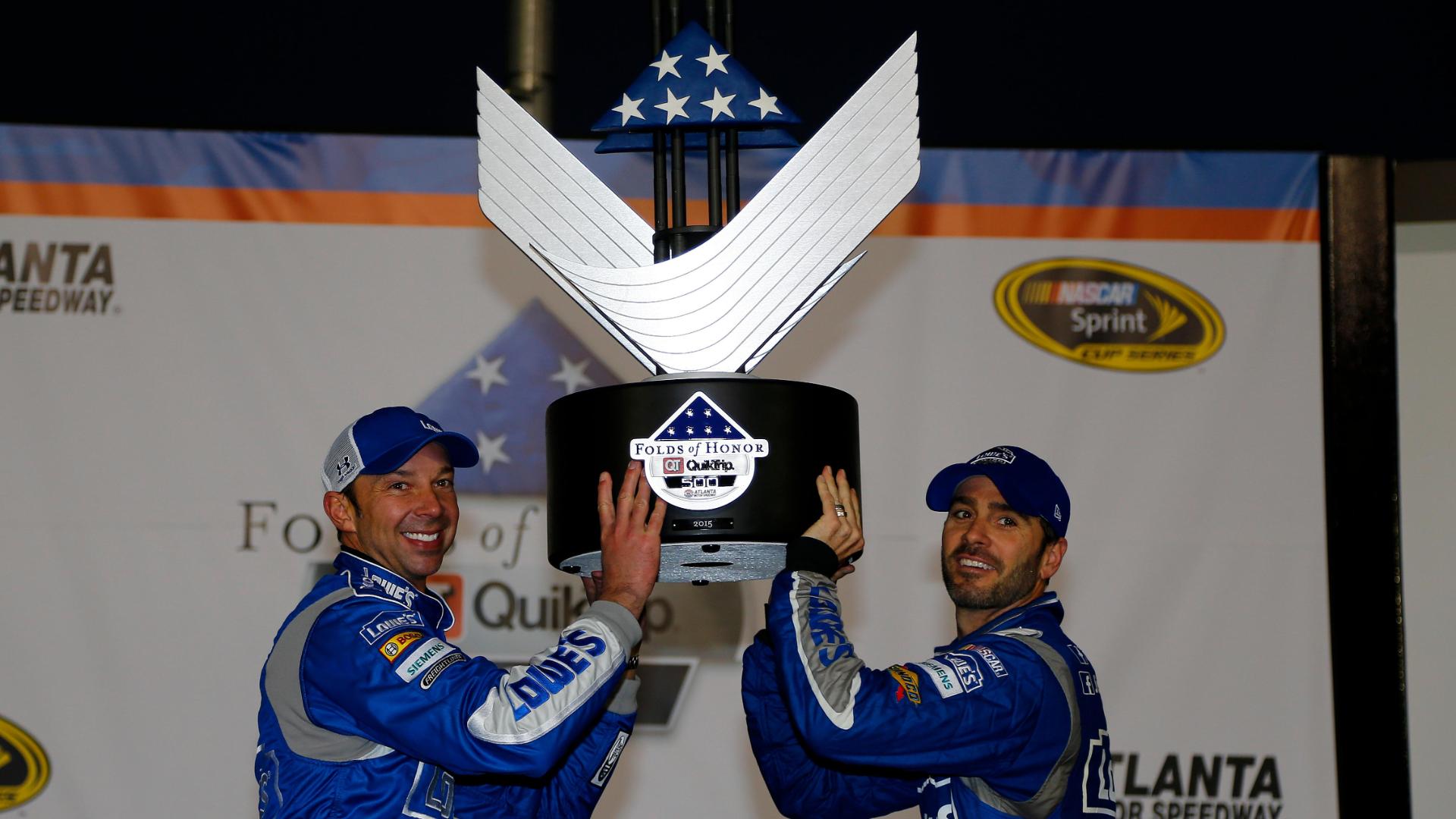 ESPN
HAMPTON, Ga. -- The season just started. The calendar hasn't even turned to spring. Yet Jimmie Johnson has all but wrapped up a shot at his record-tying seventh NASCAR Sprint Cup title.

Quickly establishing he's one of the drivers to beat -- boy, does that sound familiar -- Johnson pulled away after the final restart with 13 laps remaining to win Sunday at Atlanta Motor Speedway.

The six-time champion picked off drivers left and right after starting near the back in the second race of the year, having failed to get in a qualifying run because of inspection issues.

By the end, the No. 48 Chevrolet left no doubt it was the fastest car on the track, cruising across the finish line a comfortable 1.803 seconds ahead of one of the race favorites, defending Cup champion Kevin Harvick.

"I knew through about two sections of corners that we were going to have an awesome day," Johnson said.

It was the 71st victory of his career, and his fourth at the 1.54-mile Atlanta track. That should be enough to give him a spot in the season-ending Chase, going for a title that would tie him with Richard Petty and the late Dale Earnhardt.

"I definitely think it gives you a sign of who's going to be competitive," said Johnson, who didn't pick up the first of his four 2014 wins until the 12th race. "It takes the pressure off in some ways."

Dale Earnhardt Jr. was third, followed by Daytona 500 winner Joey Logano, who started from the pole, led 84 laps early in the race and, along with Harvick, was expected to be one of the drivers to beat.

Of course, never count out Johnson.

"When he's on, really switched on, and the car's in his comfort zone, it's amazing what he can do with a race car," said Chad Knaus, Johnson's crew chief.

After a big crash on lap 305 brought out the red flag for 9 minutes to clean up the mess, Johnson found himself at the front of the pack. When the green flag waved, he got a good jump off the line, fended off Hendrick Motorsports teammate Earnhardt going down the backstretch, and was firmly in control by the time the cars came back around in front of the stands.

There was no catching him from there.

"I got outside of him there on that last restart, but I knew in turns three and four I didn't have the preferred line," said Earnhardt, whose chances were further damaged when his car struck some debris. "He was pretty quick around the bottom."

Johnson was among four former champions, along with teammate Jeff Gordon, Tony Stewart and Matt Kenseth, who never got on the track during qualifying. Thirteen cars were stuck in the garage after failing to pass inspection.

Harvick, who qualified on the outside of the front row, also was sent to the back after blowing an engine during Saturday's practice. He quickly worked his way through slower cars and dominated for long stretches, leading a race-high 116 laps. He settled for the runner-up spot for the second week in a row, having finishing behind Logano at Daytona.

For much of the day, it was clean race even with a new rules package for non-restrictor plate races, which reduced horsepower and drag while giving drivers a device to adjust the car's balance at nearly 200 mph.

The first big crash came on lap 257, taking out Gordon, Denny Hamlin and Jamie McMurray. Then, on lap 305, Greg Biffle clipped Joe Nemechek going into the third turn, gobbling up four other cars and bringing out the red flag.

In the four-car melee started by Hamlin, Gordon skidded off the inside of the track and smashed into an exposed inside wall on the backstretch -- just beyond a SAFER barrier that would've eased the blow.

Track officials had increased the amount of padding in Atlanta after Kyle Busch smashed headfirst into an unprotected wall during the Xfinity Series race in Daytona, leaving him with serious leg and foot injuries. Busch missed his second straight Cup race, recovering at home while substitute David Ragan finished 18th in the No. 18 car.

Gordon's crash will surely step up pressure on NASCAR to mandate extra padding on all concrete walls.

"I found the one spot where there's no SAFER barrier," said Gordon, who wasn't injured. "Hopefully, soon, they'll get that fixed."

Gordon was making his final appearance at Atlanta, the track where he began his Cup career at the end of the 1992 season. The four-time champion, who plans to retire at the end of the season, is off to a rough start in his farewell tour after winning the pole for the Daytona 500. He finished 33rd in the season opener, where he was also caught up in a wreck, and ended up 41st in Atlanta.

The start of the race was delayed nearly an hour to allow the track to dry after morning showers.

While the rain held off the rest of the way, the temperature was only 43 degrees when the green flag waved under low, thick clouds. Not surprisingly, the stands were not even half full, another blow for one of NASCAR's most historic tracks, which had its race shifted from Labor Day weekend to a less-desirable March this season. 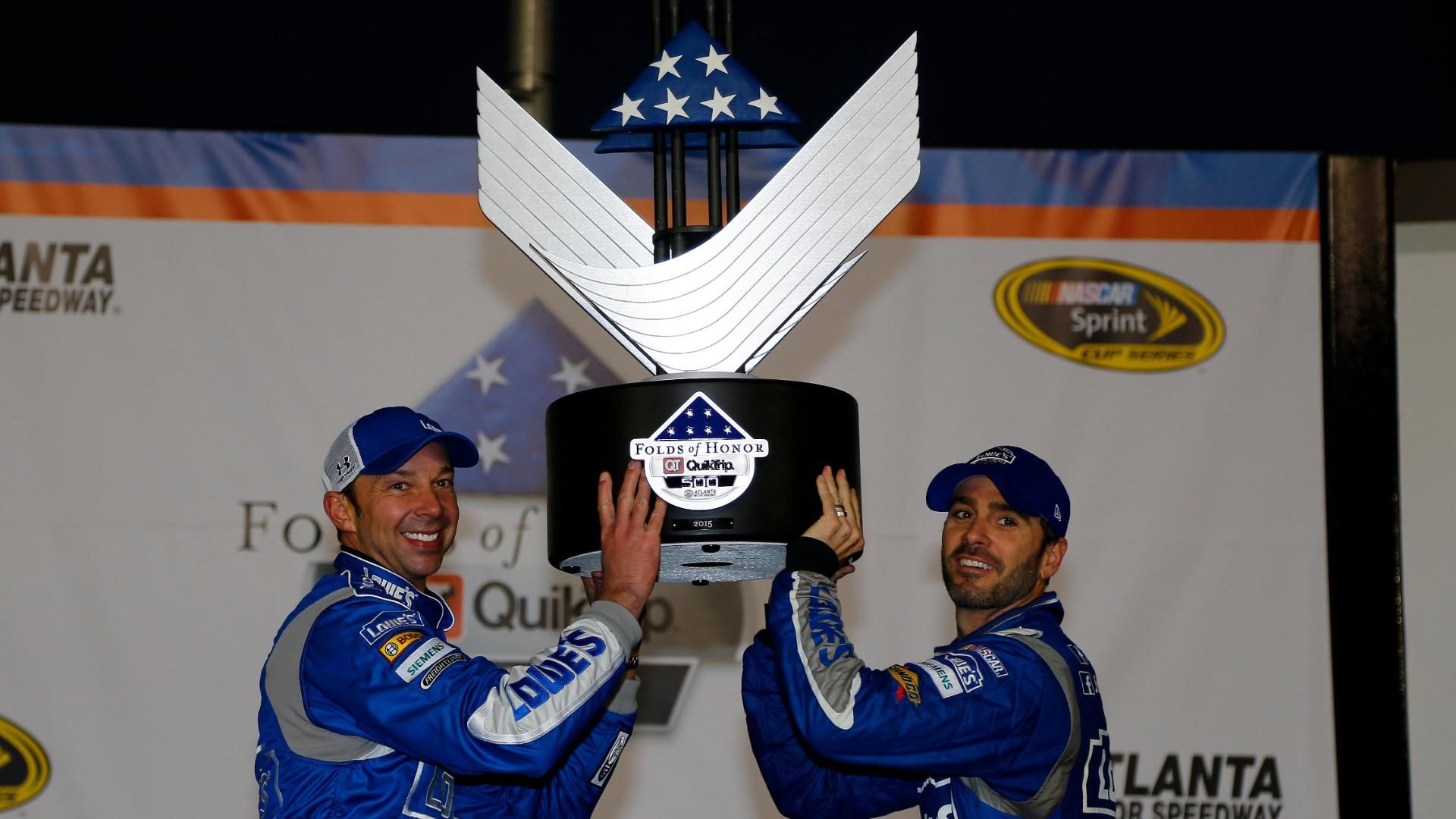