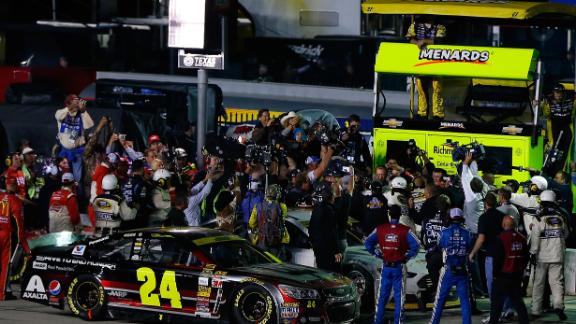 ESPN
FORT WORTH, Texas -- Brad Keselowski's face was puffy, and he took a couple quick drinks of water to wash the blood from his mouth. So close to a big playoff win, Jeff Gordon was left with a cut on his lip.

The Chase for the Sprint Cup championship took another intense turn Sunday night when past champions Gordon and Keselowski were a part of a brawl after Jimmie Johnson won his third consecutive Texas fall race.

Johnson emerged from a frantic finish, the second attempt at an overtime two-lap sprint to the finish after his teammate Gordon spun out from the front following contact with Keselowski.

While Johnson celebrated his fourth victory at Texas and 70th Sprint Cup win overall, fireworks exploded in the sky -- and on pit road.

An irate Gordon stopped his car right by Keselowski and confronted him. There were plenty of punches thrown, with NASCAR officials in the middle of crew members and others around Keselowski's No. 2 car.

"I couldn't even tell you what happened," said Keselowski, who confirmed he was hit by someone. "Just a melee of people."

It seemed the only contact among drivers was when Kevin Harvick shoved Keselowski in the back to push him into the fracas, and Gordon briefly appeared to grab hold of Keselowski's firesuit.

All the punches thrown appeared to come from crew members -- including a member of Gordon teammate Kasey Kahne's team who appeared to land several shots on Keselowski from behind.

Gordon was leading on a restart on lap 335, one more than the race's scheduled length, when he took the outside lane. When Gordon drifted up a bit, Keselowski pushed through the gap, and made contact that left Gordon's car with a cut tire.

"We were just racing for the win. I didn't wreck him, and just raced him hard. He left a hole. Everything you watch in racing, you leave a hole, you're supposed to go for it," Keselowski said. "I don't want to ruin anyone's day. I wanted to win the race and that was the opportunity."

Gordon said he was on older tires when "out of nowhere I got slammed by the 2." He then used an expletive in referring to Keselowski, who finished third.

"The way he races, I don't know how he ever won a championship. This is why everyone is fighting with him," Gordon said. "There wasn't any conversation. You can't have a conversation with him. There's big consequences. To me, it's just a bunch of crap. The kid is just doing stuff way over his head."

Gordon spun out, lost a lap in the pits and finished 29th. He also became the second competitor in four races to confront Keselowski after the checkered flag.

NASCAR will review the post-race brawl and penalties could be issued during the week. Keselowski was fined $50,000 for his behavior at Charlotte, but Matt Kenseth escaped penalty because he did not throw any punches when he jumped Keselowski from behind.

Robin Pemberton, NASCAR senior vice president of competition and racing development, indicated he had no problem with the hard racing in Texas. He might have a different take on what happened after the race.

"You shouldn't punch somebody," Pemberton said. "Everybody gets together, and when you're holding on to each other and grabbing and this, that and the other, it's one thing. When punches are landed, that's a different scenario."

Johnson won by a half-second over Chase contender Harvick, who then pushed Keselowski into the fray.

"If you're going to race like that, you're going to have to man up at some point," Harvick said afterward. "I didn't get in the middle of anything. I just turned him around and told him to go fight his own fight."

Johnson, the six-time Cup champion who was eliminated after the second round in the new Chase format, led 191 of the 341 laps.

The next highest-finishing Chase contenders behind Harvick and Keselowski were Carl Edwards in ninth and Denny Hamlin 10th.

Texas was the second consecutive Chase race won by a driver already eliminated from title contention. That means at least three drivers will advance on points to get into the final four in the season finale at Homestead in two weeks.

The third round of the Chase wraps up next Sunday in Phoenix, where Harvick won eight months ago in the second race of the season. Kenseth and Hamlin were the only of the eight Chase contenders to finish outside the top eight in that race.

Joey Logano finished 12th at Texas, but is listed first in points while having the same number as Hamlin and two more than Ryan Newman. Gordon is fourth, a point ahead of Kenseth and Carl Edwards, followed by Keselowski and Harvick -- though there is only an 18-point gap between first and eighth place.

Johnson Wins, Tempers Flare After Race
After Jimmie Johnson captured the checkered flag at the Texas Motor Speedway, Jeff Gordon and Brad Keselowski got into a fight due to an altercation on the track.

Gordon, Keselowski Fight After Race
Jeff Gordon and Brad Keselowski got into a fight after an altercation during Sunday's race at Texas Motor Speedway.