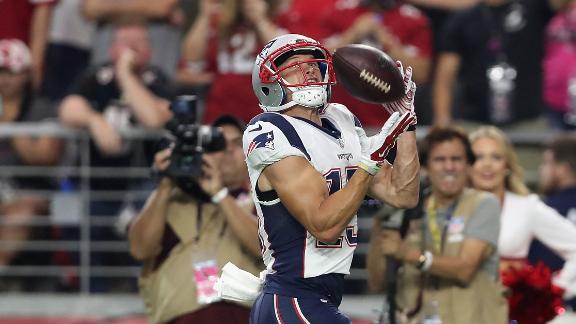 GLENDALE, Arizona -- Making his first career regular-season start, New England Patriots quarterback Jimmy Garoppolo got off to a blazing start Sunday night, throwing for 75 yards on his first drive and capping it off with a 37-yard touchdown strike to receiver Chris Hogan down the left sideline.

Garoppolo finished with 264 passing yards and a touchdown with no interceptions, leading the depleted Patriots to a 23-21 victoryover the Arizona Cardinalsat University of Phoenix Stadium.

"He made some good plays," Belichick said. "It is not perfect, but he made a lot of good plays."

Late in the fourth quarter, Garoppolo directed the Patriots from their own 19 to the Arizona 15 to set up Stephen Gostkowski's 23-yard field goal for what proved to be the game winner with 3:44 to play.

After the first-quarter touchdown pass, Garoppolo's emotion came out, as he jumped into the arms of his offensive linemen and pumped his fists.

Garoppolo started in the place of Brady, who is serving a four-game suspension to open the season as part of the NFL's Deflategate punishment.

As part of their game plan against the Cardinals, the Patriots got the ball out of Garoppolo's hand quickly.

According to ESPN Stats & Information, the last time Brady threw for 75 yards on an opening drive was Week 7 of the 2014 season against the New York Jets (76 yards).

Not only were the Patriots without Brady, but they also didn't have tight end Rob Gronkowski, defensive end Rob Ninkovich and two starters on the offensive line.

"Whoever is out there, we have confidence in one another," he said. "That is a good thing we have going for us."

Garoppolo connects with Hogan to give Patriots early lead
Jimmy Garoppolo drops back and finds an open Chris Hogan, who goes in for the 37-yard touchdown to give the Patriots a 7-0 lead over the Cardinals.