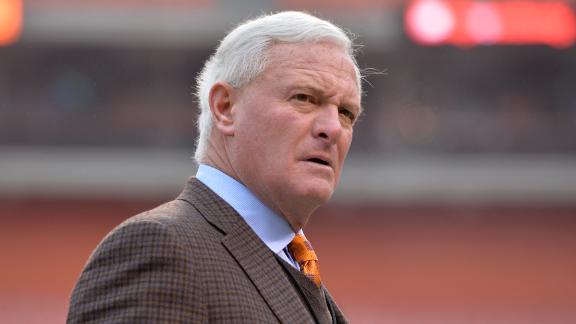 BALTIMORE -- Jimmy Haslam declared that some of the Cleveland Browns' young players need to "grow up," saying that players who are not dependable disrespect themselves, the team and the organization.

The Browns' owner did not nameJohnny Manziel, Justin Gilbert or Josh GordonSunday, but the implication was clear.

"I think a player who can't show up for meetings, can't make practice, can't make weightlifting disrespects himself," Haslam said. "But I think more importantly, and I think this is what these young guys miss, they disrespect the team, the coaches, the staff, the fans.

There's a lot of people in our organization whose livelihood depends on how well we do. We're not gonna tolerate people who are irresponsible, no matter what round they're drafted in."

Gordon was suspended for the season finale -- a 20-10 loss to the Baltimore Ravens -- for missing a walk-through on Saturday.

Manziel was fined for being late to his treatment for an injured hamstring, and Gilbert was inactive Sunday after being late for a meeting Saturday night. Both rookies were instructed to stay in the locker room during the game, something the team will address Monday.

According to multiple media outlets, Manziel threw a party Friday night that was attended by multiple members of the team, including Gordon.

Haslam said the Browns had to "figure it out" when asked whether Manziel is the quarterback of the future, adding that the team would continue to work with the "young guys."

"We're gonna give them a chance," Haslam said. "They're young kids. We're going to work with them -- hopefully they grow up.

"But if they can't grow up and they can't be responsible to the their teammates and the coaches and our great fans, then they won't be with the Cleveland Browns."

Browns coach Mike Pettine promised on Monday that he would address the situation of the three players who caused such a furor. But he declined on Sunday.

"It's disrespectful to the guys that put the uniform on today and went out and played their hearts out for the Cleveland Browns," Pettine said. "We have guys that we should be celebrating."

He then mentioned several, including Joe Haden, who played with the flu, Jim Leonhard, who is retiring, Craig Robertson, Marlon Moore, Joel Bitonio, Joe Thomas, Karlos Dansby and Donte Whitner.

"There were guys that didn't need to go out there and play," Pettine said. "They could have shut it down and didn't. And to me, it's disrespectful to them and the way they have played today. ... I'll have plenty to say tomorrow."

Haslam made clear that he is not making a coaching change after the season, saying Pettine and general manager Ray Farmer will "absolutely" be back.

Haslam Calls Out Younger Players
Browns owner Jimmy Haslam comments on some of the younger players on his team who have engaged in irresponsible actions.

Reports: Manziel Party Led To Gordon Suspension
Merril Hoge and Tom Waddle react to the news that Johnny Manziel threw a party at his apartment Friday night that was attended by several of his teammates, including Josh Gordon.