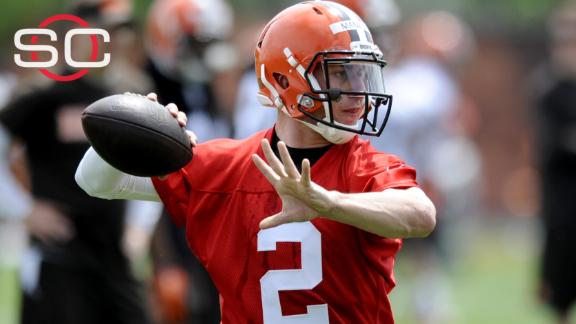 BEREA, Ohio -- The hot seat cooled off considerably in Cleveland on Saturday.

Browns owner Jimmy Haslam said that the team's win-loss record in 2015 will not affect the future of coach Mike Pettine and general manager Ray Farmer.

"[I] Understand why people might ask that after a couple bumps in the road the first couple years. I think we're putting in place a good foundation."

"I think we got the right people in place to over a period of time be successful here," Haslam said.

The Browns went 7-9 last season in Pettine's first year as a head coach and Farmer's first year as a GM. But despite a three-win improvement from the previous year, Cleveland's 2014 season ended in disappointing fashion, as the Browns lost their last five games to fall out of postseason contention.

"If I had said at this time last year we were going to be 7-9, you all would have said, 'That's pretty good,'" Haslam said. "The problem is we lost our last five. We get that."

Pettine faced intense scrutiny throughout the season for his handling of rookie Johnny Manziel and the team's quarterback situation.

The Browns got off to a 7-4 start with veteran Brian Hoyer as their starter. But Hoyer threw five interceptions over a two-game stretch in November, prompting Pettine to turn to Manziel, who struggled in his brief audition as a starter before suffering an injury in Week 16.

Manziel, who currently is competing as the Browns' backup behind Josh McCown, spent 10 weeks in a treatment facility after the 2014 season.

"I think we're pleased that Johnny did the things he should do in the offseason," Haslam said. "It was a great improvement over his first year, but anything less would have been totally unacceptable. So he's working hard.

"But playing pro football, you have to be a pro, particularly playing the position he does. So he's got to work hard every day on and off the field. He's making progress, but he's got a long way to go. But we're obviously pleased with the offseason."

Haslam would not, though, say the team has to know what it has in Manziel by the end of this season.

"He's barely 22 years old," Haslam said. "He's still young. So I think over the next couple of years we've got to see if Johnny can be a legitimate quarterback or not.

"I don't want to put too much pressure on him or our coaches and say it has to happen this year."

Farmer has been suspended for the first four games of the 2015 season for sending texts to team sideline personnel during games last season.

Farmer sent text messages throughout most of the season, a source close to the situation told ESPN. The texts took place during multiple games and continued at least until Manziel got his first start in Week 15.

The texts did not necessarily deal with strategy, but with issues related to quarterback play, second-guessing of play calls and use of personnel -- especially the quarterback. The individual on the sideline was expected to relay Farmer's information/requests to the coaching staff.