Joe Maddon interested in taking actor up on cameo in 'Curb' 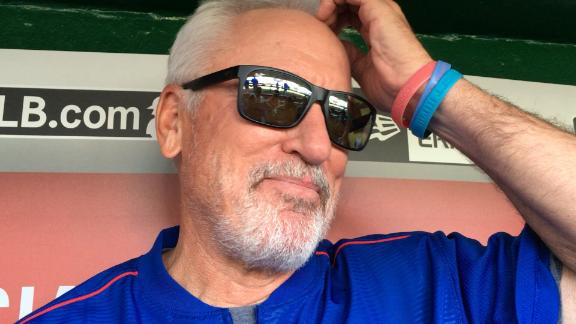 WASHINGTON -- Though he's known for his effervescent demeanor,Chicago Cubs manager Joe Maddon is more than willing to curb his enthusiasm if it means a television cameo.

Maddon, Chicago's second-year manager, said he is excited to take up actor and rabid Cubs fan Jeff Garlin's invitation to appear on the HBO show "Curb Your Enthusiasm" after it was announced the comedy would return with new episodes after a long hiatus.

"We're all happy that it's coming back," Maddon said Tuesday afternoon. "Still the best."

Speaking on ESPN 1000 earlier in the day, Garlin reiterated his long-standing invitation.

"I promised him," said Garlin, a Chicago native. "I'm being very public about it. I'll do my best to get him on. And when I say 'do my best,' I think it will happen. And it's during the offseason, so we'll do it."

Garlin said he thinks shooting will begin in "January or February" and that even if it runs into spring training Maddon didn't think it would be a problem.

Garlin said that Larry David, the show's star and creator, is a big baseball fan who would be more than happy to welcome Maddon to the show.

"A one-line part at a restaurant or something," Garlin said of Maddon's potential role.

Maddon said he doesn't want to play himself, but Garlin intimated that's exactly the part he would play. Garlin has the same admiration for Maddon as Maddon has for the show. And Garlin said he thinks this could be the year for the Cubs.

"It will overwhelm me like the birth of a child," Garlin said laughing. "I will probably just sit in my seat crying, inconsolable. People should not approach me at that point."

In Garlin's estimation, the Cubs' fortunes turned for the better once Maddon showed up.

"The whole change was when Maddon came on board," Garlin said. "Maddon was a game changer."