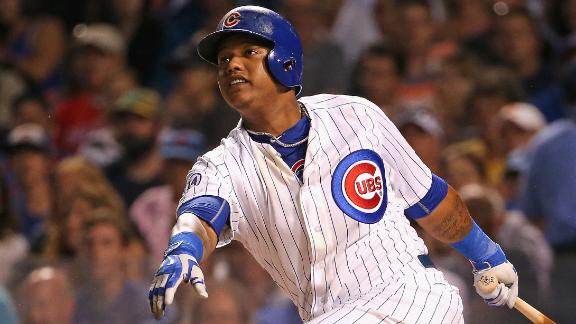 CHICAGO -- Cubs shortstop Starlin Castro was assured by manager Joe Maddon he wouldn't be traded during a meeting on Tuesday night after Castro was double-switched out of a 7-2 loss to the Colorado Rockies.

"I said, 'You're not getting traded,'" Maddon recalled. "Just relax and play. And don't worry about this stuff."

There's a feeling in baseball the Cubs will move Castro sooner or later to make room at shortstop for rookie Addison Russell. Russell is known as a high-end defender, while Castro is below average. The meeting between manager and player came at the request of Castro after he was pulled in order to keep pinch hitter Chris Coghlan's bat in the lineup as Coghlan had homered coming off the bench in the seventh. Castro was also told he wasn't starting in Wednesday's game against the Rockies.

"It feels weird because it's never happened to me," Castro said of being pulled from the game.

This is the new reality for the three-time All-Star. No longer is he a 162-game, middle-of-the order player who can expect to play nine innings every game. And now he's also been the subject of trade rumors, something unthinkable a few years ago when he signed a team-friendly contract in the midst of his second All-Star season in 2012.

"It's difficult sometimes," Castro said of the rumors. "I'm not supposed to be thinking about this. Sometimes when we're not doing good rumors sometimes are on my mind. It's not supposed to."

Maddon has always been known as a good communicator and obliged Castro out of consideration for the situation facing the five-year veteran.

"He wanted to talk to me because I let it be known he wasn't playing [Wednesday]," Maddon said. "Of course his mind is going to be running all over the place. I explained to him the double switch yesterday. I didn't want to take Coghlan out of the game. And of course he's not hitting to his normal levels right now. That's a consideration."

Castro's batting average is down to .237 heading into Wednesday's game. His on-base percentage isn't much better at .271. And he's on pace for a career low in home runs.

"I want to be here," Castro said. "I want to stay here. The season is not over yet. I'm going to put my head down and keep working hard to help my team win."

The Cubs are kicking the tires on a bunch of possibilities. There isn't necessarily a lot of urgency to resolve their middle infield situation right now, though it is one of the times of the year when things can get done with other teams. The irony is the less Castro performs, the more likely he'll remain a Cub. His value has plummeted.

"He's been all over the map," Maddon said. "He's made his mark here. He's been an All-Star here. He has almost 1,000 hits here. He's only 25. He's really young. To process this whole thing isn't easy sometimes. Cut him a little slack here. I do."

Maddon knows Castro has had multiple managers and hitting coaches since breaking into the league at age 20 in 2010 -- all while a critical fan base has watched his every move.

"He understands what I'm saying to him is very sincere," Maddon said. "When you've had that many offensive coordinators and head coaches for so many years quarterbacks often times get confused. Same with shortstops."

Castro believes the talk with his manager was a good thing.

"We have a great relationship," he said. "He's on my side all the time."

Castro not being traded by Cubs at deadline
Cubs manager Joe Maddon told Starlin Castro that he won't be traded at the deadline, though ESPN Insider Jim Bowden says the team has plenty of chances to deal him that would help the club.
Related topics:
sportsespnjoe maddontradestarlin castrochicago cubsmlb
Copyright © 2020 ESPN Internet Ventures. All rights reserved.
More Videos
From CNN Newsource affiliates
TOP STORIES