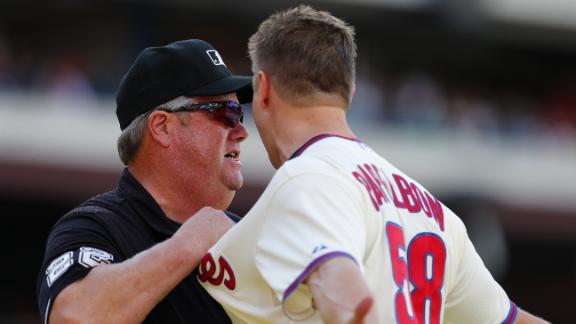 ESPN
Veteran umpire Joe West has been suspended one game without pay for grabbing Jonathan Papelbon's jersey during an altercation Sunday with the Philadelphia Phillies closer.

"Joe West handled himself appropriately in ejecting Papelbon after the player's lewd gesture to the fans," Torre said in a statement. "I fully understand that Joe was reacting to a player who was acting aggressively, and can understand his frustration with the situation.

West will serve the suspension Wednesday, when he was scheduled to umpire a game between the New York Yankees and Tampa Bay Rays.

Papelbon was suspended seven games Monday for making an obscene gesture toward fans in Philadelphia and for bumping West.

Papelbon, who insisted he was not motioning toward the fans, said in a statement that he regrets making contact with West.

The right-hander was ejected after West thought he grabbed his crotch in response to the jeers from the crowd.

The fiery reliever jogged out of the dugout and got into a face-to-face argument with West, who grasped the pitcher's jersey to hold him off, and Papelbon then argued with first-base umpire Marty Foster. Papelbon threw a cup of liquid on the field before leaving the dugout.

"The whole thing started because the fans booed him and he made an obscene gesture. He had no business doing that," West said Sunday. "He's got to be more professional than that. And that's why he was ejected."