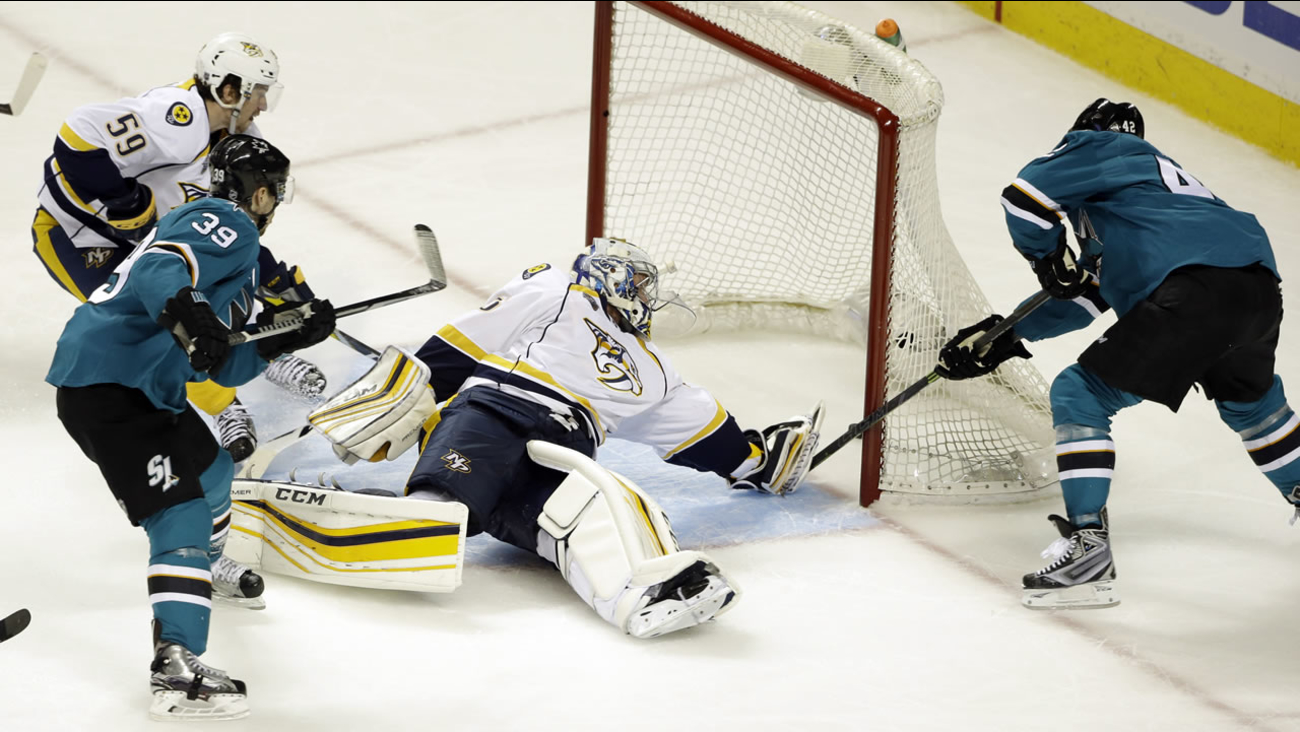 SAN JOSE, Calif. (KGO) -- Joel Ward scored the tiebreaking goal against his former team with 8:11 remaining in regulation to help the San Jose Sharks rally past the Nashville Predators 5-2 on Friday night in Game 1 of their second-round series.

Ward also set up Tomas Hertl's power-play goal that tied the game earlier in the period before scoring one of his own to help San Jose win its first playoff game when trailing after two periods since 2011.

Logan Couture added a power-play goal and an empty-netter for insurance, before Tommy Wingels sealed it with another empty-net goal as the Sharks showed few signs of rust after having six days off since beating Los Angeles in a five-game series in the first round. Martin Jones made 29 saves

Mike Fisher and Ryan Johansen scored for the Predators, who allowed five goals in the third period after having only one day off since winning Game 7 of a first-round series in Anaheim. Pekka Rinne made 33 saves.

Ward has long played his best hockey in the postseason, most notably when he scored seven goals in 12 games in 2011 to help lead Nashville to its first appearance ever in the second round. He proved he could do it just as well against the Predators.

He started the comeback by setting up Hertl near the side of the net late in a power play early in the third. Hertl then fired a shot just under Rinne's glove on the short side.

Ward then scored his 15th career playoff goal when he was left all alone after taking a pass from Joonas Donskoi. He stickhandled past Rinne before tucking the puck into the net.

Couture's first goal on the power play gave San Jose breathing room it needed when Johansen scored with 1:49 left and Rinne off for an extra skater.

But Couture and Wingels answered with the empty-netters to clinch the win.

The game lacked the usual playoff atmosphere in the Shark Tank at the start where there were rows of empty seats in the first non-sellout in the playoffs in franchise history.

Nashville's tight-to-the-vest play also helped keep the crowd out of it as the Predators did their best to prevent the Sharks from setting up in the offensive zone and Rinne was once again sharp against San Jose.

But San Jose nearly scored first when Melker Karlsson shot his own rebound toward the net just as a sliding Bitetto knocked it off the moorings. The Sharks argued that the puck would have gone in had Bitetto not knocked off the net but a replay review was inconclusive and the call of no-goal stood.

The Predators then struck early in the second after Matt Nieto was sent to the box for tripping in the offensive zone. Nashville had failed to convert on 26 of its first 27 power-play chances this postseason, including one in the first period, and appeared on its way to another blown opportunity.