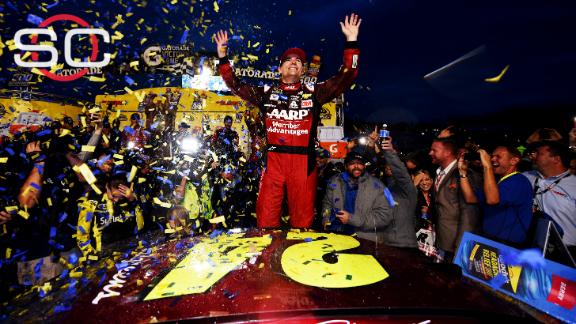 Kenseth, who himself was vying for the lead a handful of laps earlier, was involved in a wreck he felt was triggered by Logano's Penske Racing teammate Brad Keselowski. But Sunday's wreck appeared to be in response to an incident from two weeks earlier, when Logano turned Kenseth for the win with five laps remaining at Kansas Speedway, a move that eventually kept Kenseth from advancing to the third round of the Chase for the Sprint Cup.

The Goody's 500 on Sunday was the first race of the third round.

Kenseth was 10 laps down when he wrecked Logano. Although Kenseth's car was heavily damaged, NASCAR told his team not to repair it and that he couldn't return to the race.

"I had two chances to win in the last three weeks and got wrecked out of both of them going for the lead, one from him and one from Brad," Kenseth said. "That's disappointing."

"The right front was dragging down there and probably should've went to the garage area and went into the corner there and, man, couldn't get it to turn and collected him," Kenseth said. "I know it's got to be disappointing for him, you know? It's a tough sport. Some days you're the bat, and some days you're the ball. I was the ball a few weeks ago, and I was the ball again today, so that part is never fun."

Keselowski said he lost control of his car after getting hit from behind.

"I got hit from behind and pushed into the 20 [of Kenseth], and my right front wheel hit Kenseth's left rear, and it just broke the right front suspension ... and the car wouldn't turn and just kept going straight," Keselowski said.

NASCAR executive vice president Steve O'Donnell said after the race that he was disappointed in Kenseth's actions and that NASCAR will make any decisions of additional discipline by Tuesday. He wouldn't rule out a suspension.

"There's still a lot to digest from what happened tonight," O'Donnell said. "We'll do that and have some additional conversations. ... What was disappointing today was in the incident, [it was] a driver not competing for a win [and] was in fact many laps down when that happened. In our minds, that's a little bit different than two drivers really going after it coming out of turn four for a win."

Said Penske team president Tim Cindric: "I don't know what they will decide. What is done was done in the race."

Kenseth and team owner Joe Gibbs met with NASCAR officials after the race. They both declined to comment after the meeting.

Jeff Gordon won Sunday's race and the automatic bid to be one of the four drivers eligible for the championship in three weeks at Homestead-Miami Speedway.

Logano said he had hoped he would have that bid but instead finished 37th. He will probably need to win one of the next two events, Texas and Phoenix, to advance.

"It's whatever at this point," Logano said. "We're going to move on. There's a championship to win. We are going to win that."