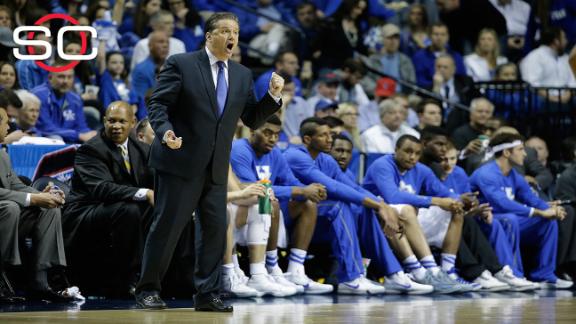 One month after Kentucky's undefeated season ended prematurely in the national semifinals with a loss to Wisconsin, coach John Calipari penned a long column discussing how the Wildcats will look in the next season or two.

And it won't include platooning.

Before last season, Calipari said he would experiment with a platoon system of two separate five-man units to deal with the depth of having nine McDonald's All Americans.

When junior Alex Poythress tore his ACL in December, all 10 rotation players were averaging between 15 and 25 minutes per game. As the season wore on and games got closer, the platoon became more along the lines of an eight-man rotation with other players getting spot minutes -- but the narrative was long established.

With seven players leaving early for the NBA draft, though, Calipari isn't planning to bring back his platoon system.

"If you ask me if I'm ever going to platoon again, my answer is NO," Calipari wrote on CoachCal.com. "Last season was an absolute outlier. It's just not the way I like to coach. I would rather play seven or eight guys because I believe that gives us the best chance to win. I think we wrote the book on platooning this year, but I hope we stick it on the shelf and never have to use it again."

Part of the reason Kentucky won't use a 10-man rotation in 2015-16 is that the Wildcats simply don't have enough players.

Tyler Ulis, Marcus Lee and Poythress will be back from last season, along with bench players Derek Willis and Dominique Hawkins. Calipari did bring in the No. 2-ranked recruiting class in the country, including Skal Labissiere (No. 2 in the ESPN 100), Isaiah Briscoe (No. 13), Charles Matthews (No. 42) and junior college shooter Mychal Mulder.

There will be talent on the roster, but it won't match that of this past season.

"I'm also excited about who we have coming back and who we have joining us next season," Calipari wrote. "I think how you will see us playing going forward will be closer to how we have always played. That won't be platooning."

Over the past month, Kentucky has also done something it hasn't done since Calipari took over in Lexington: consistently miss out on top recruits. Eight players were uncommitted at the McDonald's All American Game in early April; Kentucky landed none of them.

Brandon Ingram (No. 3), Jaylen Brown (No. 4), Cheick Diallo (No. 7), Malik Newman (No. 10) and Stephen Zimmerman (No. 12) were all prime targets for Calipari and the Wildcats, and each of them chose to go elsewhere next season.

None of those players said directly that the platoon system scared them away, but Calipari made a reference to negative recruiting by other schools in his column.

"Never in my life did I think that I would platoon, but most people didn't think we would ever win 38 straight to start the year, set a record for wins in a season and have seven players drafted," he wrote. "It's amazing people could try to use that against us, but I guess you have to come up with something."