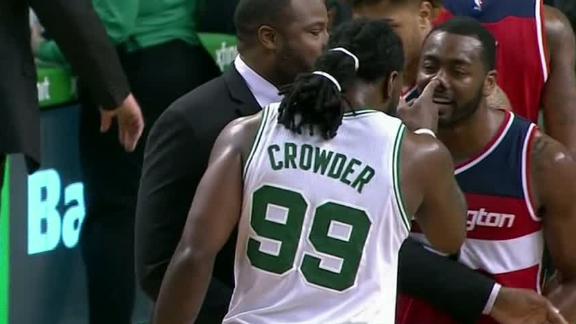 BOSTON -- Five Boston police officers stood guard between the locker rooms of the Celtics and Washington Wizards after tempers flared following the final buzzer of Wednesday's game at TD Garden.

Members of both teams had to be separated when Washington's John Wall and Boston'sJae Crowder got into an on-court dustup after the Celtics' 117-108 triumph.

Crowder could be seen putting his finger in Wall's face after the two exchanged words, and Wall appeared to land a quick open-hand slap before teammates and staffers rushed in to prevent a further escalation. Wall took another swipe at Crowder in the scrum, which left Boston's Marcus Smart and Terry Rozier trying to confront him.

Celtics guard Isaiah Thomas, who scored 20 of his game-high 38 points in the fourth quarter, was about to do an on-court interview but rushed over with two Celtics assistant coaches to pry Boston players back toward their tunnel. Shouting appeared to continue between the two teams as players entered their respective locker rooms, which are in close proximity.

Crowder didn't care to discuss what flared the incident.

Earlier in the contest, Smart and Bradley Beal had a confrontation in the second half and were separated by teammates. Beal was assessed a technical foul for his part.

Asked if it's tough to keep cool heads on the court, Crowder said simply, "[The game] was a good fight. Both teams kind of went back-to-back, so the effort was sure there. Just two teams playing hard."

The jovial Thomas tried to broker peace between the two teams by joking about the presence of his friend, boxer Floyd Mayweather, who was sitting across from the Wizards' bench.

"I just tell guys, 'Keep it hoop. Nobody's built [to fight] but the guy that was in the front row,'" joked Thomas. "So just keep it hoop and move on to the next one."

Washington's Otto Porter Jr.suggested that the Celtics played dirty. Thomas brushed that off.

"It's not us. I know that," Thomas said. "We ain't gonna be running and telling. That's what we're not going to do. But we're not a dirty team. That's not what the Celtics are about. We play hard. So if playing hard is dirty, then I guess we are a dirty team. But there was no dirty play. I didn't see none. It's just a lot of chatter. That's what guys do."

Celtics coach Brad Stevens said he ushered a couple of his players into the locker room when he heard the commotion and simply reminded his team to keep its cool. The police presence quickly defused any escalation, and Stevens arrived at his postgame news conference soon afterward.

"I heard what was going on in the tunnel," Stevens said. "All I did was walk out. There were only two guys that were walking in from the court from our team, and I just said, 'Get in the locker room.' And then I talked to the team about what we represent, and that's it."

Asked about the message from Stevens, Celtics big man Al Horford said, "I don't think I'm supposed to discuss anything, but it was just keep our heads and we're playing for bigger things."

The Celtics and Wizards have had a series of incidents over the past two seasons. Earlier this season, Smart and Wall exchanged words during the Wizards' lopsided win in November. Last season, Crowder accused former Wizards coach Randy Wittman of cursing at him and got a technical for barking back at the coach from the court.

Wall slaps Crowder during postgame altercation
After the Celtics beat the Wizards, John Wall and Jae Crowder get into a scuffle when Crowder puts his finger on Wall's nose and Wall responds with a slap to Crowder's face.