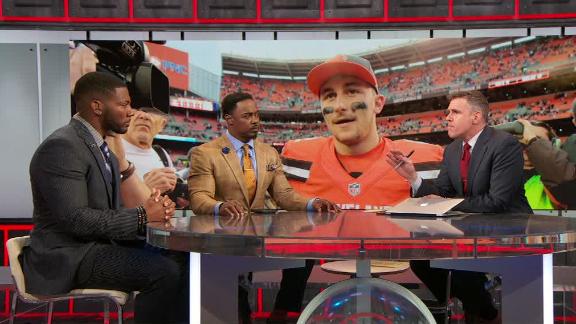 ESPN
Johnny Manziel has been accused of causing "extensive damage" during parties he hosted at a Los Angeles home he rented earlier this month, according to a letter from an attorney representing the owner of the property.

ESPN obtained the letter Friday from attorney Niki Ghazian, who wrote that "evidence suggests" the former Cleveland Browns quarterback and his friends "were consuming drugs and alcohol." Her client is seeking $31,580, including $19,580 in damage and replacement fees.

Suspended Browns wide receiverJosh Gordonreportedly was at the house during the time of its rental.

"Despite Mr. Manziel's assurances to my client that the rental was to be used strictly for his own personal and private use, surveillance footage shows that Mr. Manziel threw large parties on both nights, causing extensive damage to the subject property," Ghazian wrote. "Evidence suggests that Mr. Manziel and his guests were consuming drugs and alcohol on the property."

According to the letter, the damages include "extensive burn marks from cigarettes and marijuana" found on the floor, wine stains "that cannot be removed" from a carpet, a broken glass table and a broken door.

Ghazian wrote that Manziel stayed at the home April 4-6, and Los Angeles police arrived at the property after noise complaints April 6. She also is seeking $10,000 in rental fees and $2,000 in attorney's fees from Manziel.

Ghazian represents The Goodwin Group Inc., which owns LA Exotic Life, a private company that rents "exotic villas," among other things, according to its website.

Nicholas Goodwin, the owner of The Goodwin Group, told Cleveland.com that a man who identified himself as Gordon was at the house when Goodwin went there April 6.

"I didn't recognize Josh because he's not as recognizable as Johnny,'' Goodwin said. "I sat and talked to him and said, 'How do you know these guys?' He goes, 'I played with Johnny over at Cleveland.' I said, 'Your name?' He said, 'Josh Gordon.' And I was like, 'Wow, OK, I don't know if it's a good idea for these guys to be hanging out together.'"

Gordon has had his own off-the-field troubles. The Browns receiver was suspended for the entire 2015 season, and his application for reinstatement was denied earlier this week due to red flags in a league-administered drug test. Gordon can reapply for reinstatement Aug. 1.

Sources previously told ESPN that Gordon and Manziel have been living together in Los Angeles.

Manziel's agent, Drew Rosenhaus, said Wednesday that he will no longer represent the former Heisman Trophy winner unless he gets treatment within a five-day window. Rosenhaus has never fired a player in his 27 years as an NFL agent, according to ESPN's Ed Werder.

Rosenhaus said that from the beginning, his agreement with Manziel was contingent on the quarterback's entering a treatment facility, which he has consistently refused to do.

Manziel was selected by the Browns as the 22nd overall draft pick in 2014, their second of two first-round picks that year. His two seasons in Cleveland were marred by off-the-field struggles and limited on-the-field success, and he was waived March 11.

Manziel spent 10 weeks in rehab after his rookie season and is the subject of a grand jury investigation in Dallas into whether he assaulted his former girlfriend. The NFL is investigating whether Manziel violated its personal conduct policy in that incident.

Advice for Johnny Manziel
Ryan Clark and Brian Dawkins want to see Johnny Manziel turn his life around but believe it all starts with him focusing on football and not trying to be a celebrity.
Related topics:
sportsespnjosh gordonnfljohnny footballcleveland brownsjohnny manziel
Copyright © 2020 ESPN Internet Ventures. All rights reserved.
More Videos
From CNN Newsource affiliates
TOP STORIES