Johnny Manziel could play in opener 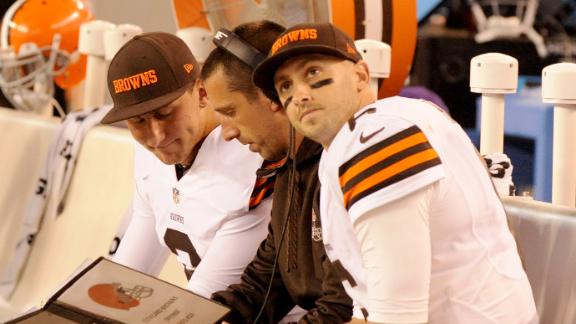 PITTSBURGH, Pa. -- Cleveland Browns coach Mike Pettine told ESPN's Sal Paolantonio the team has prepared Johnny Manziel to play in the season opener against the Steelers, but the rookie's playing time would be a "feel thing."

"We have a package of plays for him," Pettine said at Heinz Field.

That was the first time Pettine admitted he had Manziel ready to play.

"It won't be alternating series," Pettine said. "It'll be a 'feel' thing."

Pettine first acknowledged the "feel" approach on Friday, but went further with Paolontonio. Pettine said Friday the decision would be based on "change of pace."

"I don't think there would be a strict set of parameters for when to do it," Pettine said.

Brian Hoyer won the starting job for the opener, but Manziel clearly brings different skills to the position. His elusiveness and quickness in the pocket could be valuable in certain down-and-distance and field-position situations.

The Browns, though, have followed the typical approach of keeping their opponents guessing. Though the Steelers said they expected to see Manziel, Pettine kept mum and remained noncommmital while admitting he had some plays for Manziel to run.

Steelers Preparing For Manziel, Hoyer
ESPN Steelers reporter Scott Brown breaks down why Pittsburgh is preparing to play both Johnny Manziel and Brian Hoyer in its season opener against the Browns.