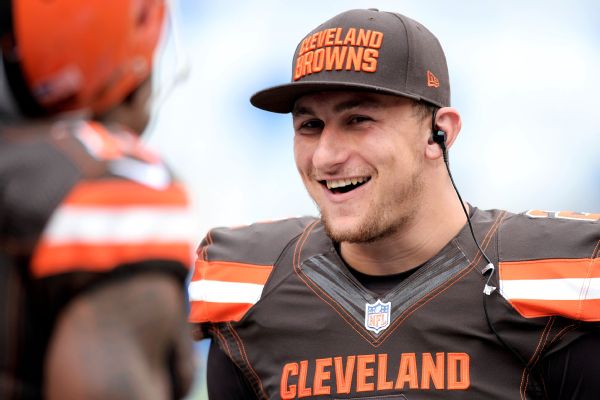 A lawyer representing Manziel and his company, JMan2 Enterprises, filed paperwork with the U.S. Patent and Trademark Office on Friday, one day before the nickname would have been abandoned.

An explanation, which needed to tie Manziel and his company to the trademark filing, was due on Oct. 1, six months after an examining attorney asked for the documentation.

Even though Manziel still isn't the owner of the trademark, he did benefit from it.

Right after Manziel was drafted, his representatives negotiated to allow the NFL Players Association to sell the nickname to its licensees in exchange for giving Manziel a higher percentage of royalties from sales of his gear, sources told ESPN.

When he did an autograph deal with Panini Authentic, he was able to get more money by agreeing to inscribe "Johnny Football" along with his autograph.

The 2012 Heisman Trophy winner was selected by the Cleveland Browns in the first round of the 2014 draft. He was cut two years later after many instances of trouble off the field.
Related topics:
sportsespnnfljohnny footballcleveland brownsjohnny manziel
Copyright © 2020 ESPN Internet Ventures. All rights reserved.
More Videos
From CNN Newsource affiliates
TOP STORIES