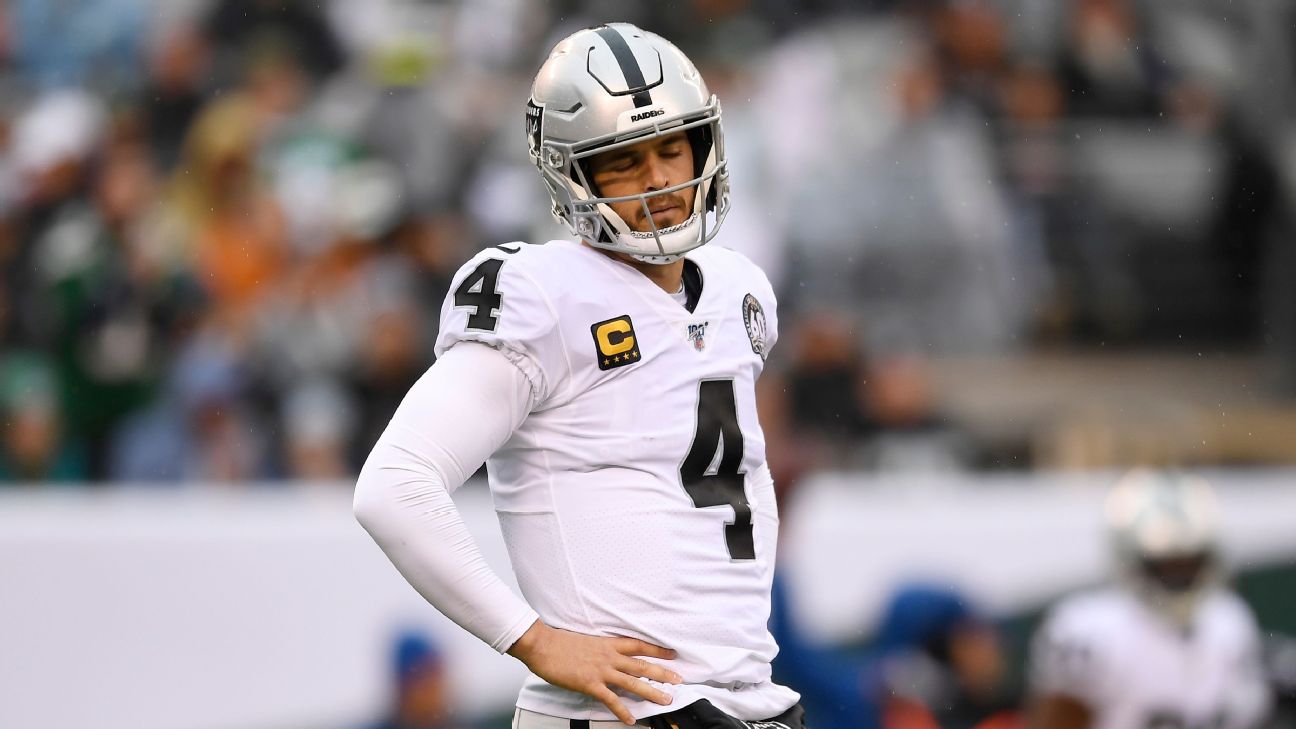 EAST RUTHERFORD, N.J. -- In an effort to protect his $125 million franchise quarterback but also due to ineffectiveness, Oakland Raiders coach Jon Gruden benched quarterback Derek Carr in the third quarter of the Raiders' 34-3 loss to theNew York Jets on Sunday.

The Raiders, who entered the game as the No. 6 seed in the AFC playoff race and a half-game behind the Kansas City Chiefs in the AFC West, were trailing 34-3 at the time and being manhandled. Carr had just thrown a pick-six to Brian Poole on a ball that bounced off receiver Tyrell Williams.

Carr, whose 127 passing yards Sunday were the fourth-fewest of his career, completed 15 of 27 passes (a season-low 55.6 completion percentage) with the interception. It was just the second time this season Carr, who entered the game leading the NFL with a 73.3 completion percentage, did not throw a touchdown pass and his 52.5 passer rating was the fourth-lowest of his six-year career (48.1 at Philadelphia in 2017, 49.1 at Kansas City in 2016, 50.5 at the Rams in 2014).

Carr seemed to take offense when asked if he had ever been taken out of a game before, saying, "I mean, it was for other reasons than you're trying to make it seem."

Indeed, Carr was removed from the blowout loss against the Jets essentially to protect him. And it was the second time this season Gruden removed Carr from a game early in a blowout loss as he also did in the 42-24 defeat at the Green Bay Packers in Week 7. Gruden also replaced Carr last season in a 34-3 loss at the San Francisco 49ers.

On Sunday, Carr was victimized early and often, though, by drops from tight end Derek Carrier, receiver Hunter Renfrow, who left the game with a rib injury, running back Jalen Richard and Williams. Mike Glennon replaced Carr and immediately had trouble with the slick football, fumbling the snap twice on his initial series.

The Raiders saw their three-game winning streak end as they fell to 6-5, and into a three-way tie with the Indianapolis Colts and Pittsburgh Steelers for that sixth and final playoff spot with five games to play. They go on the road to play the 7-4 Chiefs next week.

"We got our butts kicked, and there's no other way around that," Carr said. "They got after us from start to finish, and hopefully, it's an eye opener. Hopefully, we take it and learn from it ... we got our face kicked in a little bit, and you try to look forward, and hopefully, everybody wakes up.

"Give praise to the Jets; they showed up better than we did and it's unacceptable. It's my fault and I take full responsibility." 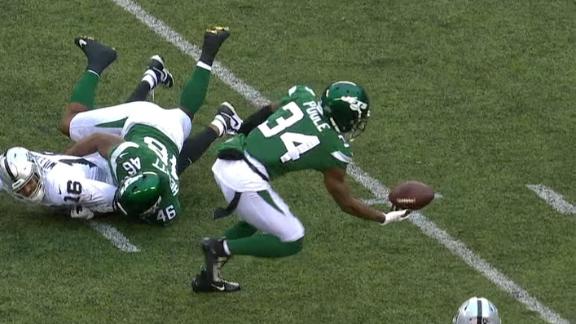