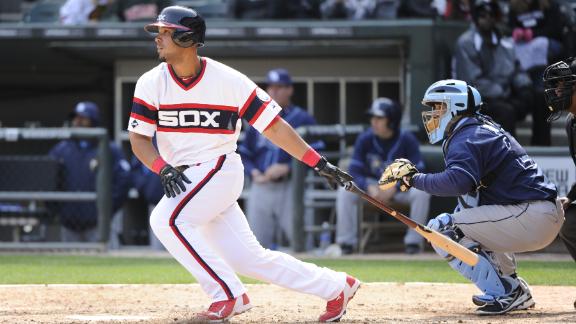 CHICAGO -- Jose Abreu of the White Sox on Monday became the second player in baseball history to win his league's overall and rookie player of the month honors in his first month in the majors.

Considered a gamble when he was signed for six years and $68 million this winter despite having no major league experience, the first baseman is already paying big dividends for the White Sox and was named the American League's player of the month for April as well as its rookie of the month.

"I thank the Lord to be able to achieve this and it's obviously something that makes me happy," Abreu said through an interpreter. ""And I'm thanking my teammates as well. It's a great thing. I'm very humbled to get that honor."

He and Yasiel Puig of the Los Angeles Dodgers are the only players to win both awards in their debut month in the majors. Puig did it when he burst on the scene in June.

It is the eighth time a rookie has won both awards in the same calendar month.

"He's a good player right now, and for the future, you're always hesitant to say he can get so much better because he's got off to such a great start, but there's things he's going to learn that are going to make him better," manager Robin Ventura said.

Abreu quickly made his presence known with 10 home runs and 32 RBIs -- the most in each category for a rookie before May 1 in major league history. He also became the first player to record four games of at least four RBIs over his first 29 games.

"I think he's going to learn in certain situations that they're going to pitch around him," Ventura said. "Eventually he's going to learn what pitchers are trying to do and probably be a little more selective and not swing at as many pitches. But as far as he potential, sky's the limit for him. You hope he continues to improve and get better at little things."

The Minnesota Twins' Kent Hrbek in 1982 was the last rookie to lead the majors in home runs and RBIs in the season's opening month. The last White Sox player to lead the league in both categories, regardless of month, was Roy Sievers in July 1960.

Abreu had three multi-homer games in April, including one on April 25 against the Tampa Bay Rays when he delivered a game-ending grand slam -- just the second in April by a rookie in baseball history.