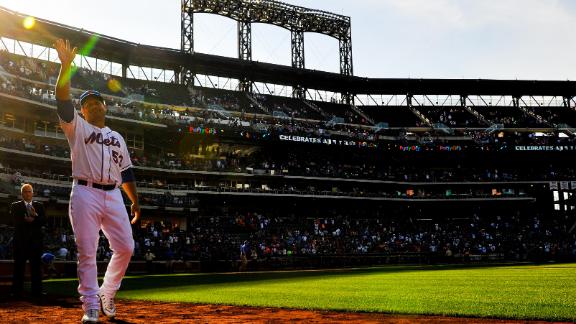 ESPN
NEW YORK -- Jose Altuve was added to the Houston Astros' lineup after the team reversed course on its original decision to bench him -- against his wishes -- in an attempt to protect his lead in the American League batting race.

Altuve still wrapped up the AL batting crown as he went 2 for 4 with a ground-rule double and a run-scoring infield single in the loss to the Mets, ending the season with 225 hits and a .341 average -- both best in the majors.

Altuve began the day with a three-point lead over Detroit slugger Victor Martinez, who went 0 for 3 and finished at .335.

In the clubhouse afterward, the Astros toasted Altuve with champagne poured into plastic cups. He posed for pictures with several teammates and autographed bats for them.

"I think this is way better than just sitting on the bench and waiting for something," Altuve said. "If you want to win something, you've got to win it on the field."

Altuve said all along he wanted to play Sunday against the Mets, but general manager Jeff Luhnow and interim manager Tom Lawless told the All-Star second baseman in the morning he would not be in the lineup.

#Astros update: Jose Altuve is in the starting lineup for today's game at second base.

- Houston Astros (@astros) September 28, 2014#Astros statement (2/2): As the best player, he deserves the right to make that decision.

- Houston Astros (@astros) September 28, 2014Altuve said he was prepared to start against the Mets.

"I came to the park today ready to play," Altuve said.

After going 0-for-4 Saturday at Citi Field, Altuve's average slipped to an AL-leading .340. Martinez lifted his average to .337 with a 1-for-2 performance Saturday against the Minnesota Twins.

Despite employing standouts such as Lance Berkman, Moises Alou, Craig Biggio, Jeff Bagwell and Cesar Cedeno, the Astros have never had a batting champion.

ESPNNewYork.com's Adam Rubin and The Associated Press contributed to this report.