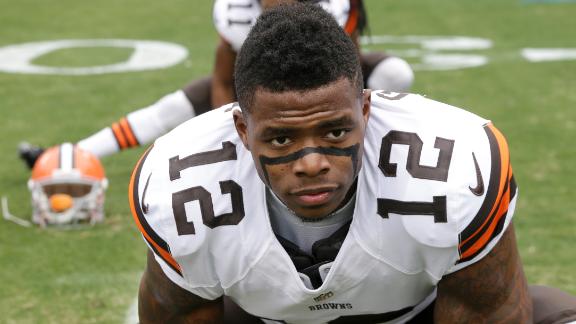 Cleveland Browns wide receiver Josh Gordon has failed another drug test and now will be subject to a one-year suspension, according to league sources.

Gordon tested positive for alcohol, a source said, confirming a report by Pro Football Talk. The failed test is the latest in a long line of setbacks for Gordon, whose future in Cleveland and the NFL now will be in question.

"Clearly we are very disappointed to hear the latest report regarding Josh," the Browns said in a statement. "At this point, due to the confidential nature of the NFL's substance-abuse policy, we have not been made aware by the league of a failed test. We are in the process of gathering more information and will provide further comment at the appropriate time."

Gordon was arrested on July 5, 2014, and charged with driving while impaired after speeding down a street in Raleigh, North Carolina. Gordon was previously suspended for the first two games of the 2013 season for violating the league'ssubstance-abuse policy.

Gordon ended this season in controversy when, on Dec. 27, he was suspended for the final game of the season for violating team rules. He would have been suspended for all of 2014 were it not for a new drug testing and punishment policy the NFL implemented that allowed him to return after missing the first 10 games.

He entered the NFL after being dismissed from Baylor for a failed marijuana test. Gordon later told the Houston Chronicle: "It was against school policy, of course, and I was [suspended] in the summer. I've definitely put that part of my life behind me. I don't plan to ever go back there. It was a difficult time, but I learned from it, and I've moved on."

His agent, Drew Rosenhaus, could not be reached for comment.