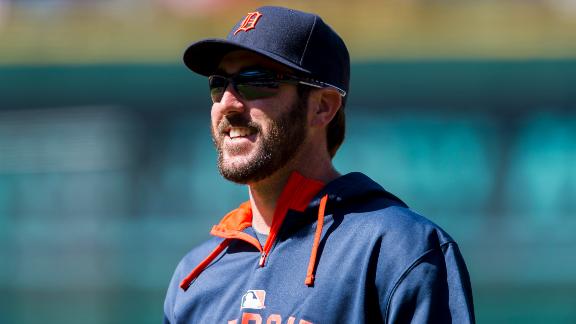 DETROIT -- Tigers starter Justin Verlander is set to make his first start this season against the Cleveland Indians on Saturday.

The 2011 American League MVP and Cy Young Award winner has been sidelined all season after leaving a March 27 spring training game with a strained right triceps. His recovery suffered several setbacks before the past couple of weeks.

He has made two rehab starts for Triple-A Toledo, and allowed only one run on four hits and no walks in 5 2/3 innings Saturday against Columbus.

He threw 93 pitches, hitting 94 mph with his fastball and striking out nine.

"I feel like today was the step I wanted to see," he said after the start. "The biggest thing is getting my pitch count up and also getting some innings. Not just throwing three innings, but getting out there and getting up and down a few times."

With Verlander experiencing no soreness afterward, the Tigers are ready for him to finally take his spot in the rotation.

"I'm looking for him to pitch well," Tigers manager Brad Ausmus said. "There's still a bit of strengthening and building-up process for him. It's only his third start since the injury. There's not a lot of restraints. If he pitches well, we'll roll with him."

Ausmus said Verlander won't be on a specific pitch count but that they wouldn't let him get close to 115.