Justin Verlander to have MRI 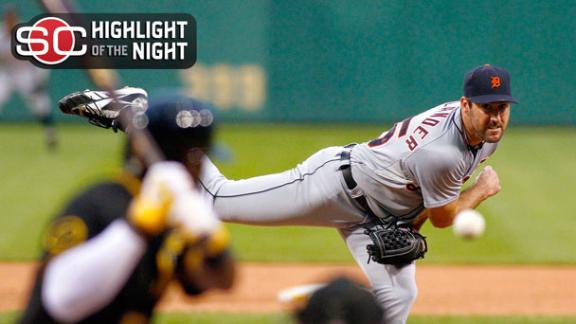 PITTSBURGH -- Justin Verlander pitched only one inning of the Detroit Tigers' 11-6 loss to the Pittsburgh Pirates on Monday night because of soreness in his right shoulder.

"Just didn't feel great," the ace right-hander said. "Disappointing on a night that the team really needed me."

Verlander threw 40 pitches and bunted in the second inning before he was removed and right-hander Justin Miller took over the mound in the bottom of the inning. Verlander is scheduled to undergo an MRI on Tuesday in Detroit.

"I'd be lying if I said I wasn't a little nervous," the former American League Cy Young Award winner said. "I've never been through this before."

Verlander said there wasn't any sharp pain in his shoulder, but Tigers manager Brad Ausmus took him out as a precautionary measure.

"The ball wasn't really coming out of his hand," Ausmus said. "So after watching him finish the inning, I decided I didn't want to risk him getting seriously injured."

Ausmus was concerned about Verlander from the beginning.

"I was actually immediately worried from the start of the game," Ausmus said. "Quite frankly, looking back, I almost wish I would have taken him out when I went out with [trainer] Kevin Rand."

It was the shortest regular-season start of Verlander's career.

The loss, coupled with Kansas City's 3-2 win over Oakland, dropped the Tigers a half-game behind the now first-place Royals in the AL Central Division.

This is potentially another blow to a Tigers pitching staff that already saw right-handers Anibal Sanchez and Joakim Soria placed on the 15-day disabled list Sunday before enduring a 19-inning loss to the Toronto Blue Jays.

Left-hander Robbie Ray (1-1, 4.70 ERA) will be recalled from Triple-A Toledo to start Tuesday in Detroit's second of two games in Pittsburgh. Rick Porcello's start has been pushed pack to Friday, with Buck Farmer going Wednesday and Max Scherzer on Thursday.