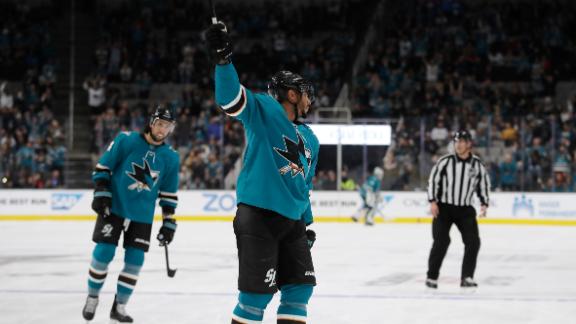 ESPN
SAN JOSE, Calif. -- While the Carolina Hurricanes dominated play in the first period, it was Evander Kane who put the puck in the net.

Kane became the first San Jose player to score three goals in the opening period and the Sharks beat the Hurricanes 5-2 on Wednesday night for their third straight victory.

"The puck was finding my stick and I was finding the back of the net there," Kane said. "It was obviously nice to be a part of getting that lead. The guys did a great job of getting pucks to the net."

Kane opened the scoring at even strength and added two power-play goals in the first for his second career hat trick. Tomas Hertl had a goal and two assists, and Barclay Goodrow also scored. Martin Jones made 36 saves for the Sharks, who are hitting their stride after beginning the season with four straight losses.

Dougie Hamilton and Erik Haula scored for the Hurricanes, who had won seven of their first eight games this season for the best start in franchise history. James Reimer stopped 17 shots.

But the big difference was on the power play, where the Sharks scored twice and killed off all four Carolina chances.

"Our special teams were just terrible tonight," Hurricanes coach Rod Brind'Amour said. "We had some pretty good chances but we gave them up. They got a couple of early bounces and that was really the difference in the game."

The Hurricanes controlled play for much of the opening period, holding a 14-3 advantage in shots at one point despite having played the previous night in Los Angeles. But Jones came up with some big saves early and Kane was the player who got most of the production.

He opened the scoring midway through the period when Erik Karlsson's point shot was blocked. Kane gathered the rebound and beat Reimer from the slot.

After Hamilton tied the game with his fifth goal of the season, Kane scored twice on the power play in the final three minutes of the period. His second goal was similar to the first as Brent Burns' point shot was blocked and Kane converted the rebound from the slot.

Then in the closing seconds of the period, Kane deflected a shot from Burns past Reimer to make it 3-1.

"Special moment for him," Sharks captain Logan Couture said. "He's a goal scorer. That's what he does. He goes to the net hard and he fills that role for us. When he's hot, there's not many guys that are as hot as him. We're hoping that he rides that wave right now."

Goodrow scored his third of the season when he forced a turnover in the neutral zone and skated in to beat Reimer.

The Sharks nearly added another goal late in the second when Lucas Wallmark's back pass on a delayed penalty hit the Carolina post after Reimer had been pulled for an extra attacker.

The Hurricanes were unable to convert on the ensuing power play or during 45 seconds of a two-man advantage when Goodrow was sent to the box for hooking.

"They got the bounces in the first and we're down by two and we get a 5-on-3 and if we score there it's just a one-goal game," Haula said. "We have to execute better."

Game notes
Kane's first hat trick came on March 17, 2018, when he scored four times at Calgary. ... The Sharks entered the game with only three power-play goals before converting both opportunities in the first period. ... Sharks forward Marcus Sorensen returned after missing three games with an upper-body injury. ... Carolina forward Sebastian Aho assisted on Hamilton's goal for the 200th point of his career.