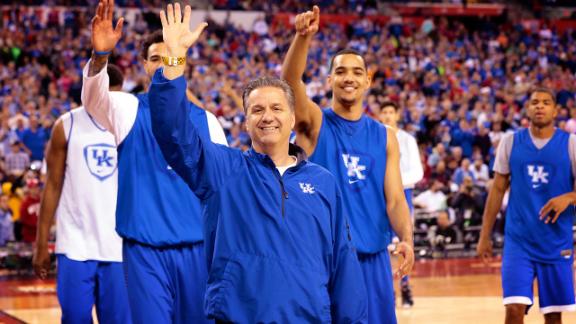 The third annual Big 12/SEC Challenge will shift from December to late January and include a monumental midseason meeting of national powerhouses that will anchor the event's pairings, which were released on Thursday.

A matchup between Kansas and Kentucky, two teams that should be ranked among the top 10 programs in the country once the preseason polls are released, in Lawrence, Kansas, on Jan. 30 will create a midseason splash.

That's just one of the intriguing matchups -- all played on Jan. 30 -- that will be played during the Big 12/SEC Challenge slate, which will air on the ESPN family of networks (eight of the 10 games on ESPN or ESPN2) and feature 12 teams that reached the NCAA tournament last season.

One of those squads, Big 12 contender Iowa State, led by Wooden Award contender Georges Niang, will travel to College Station to face Texas A&M, a team that will build around one of the most talented recruiting classes in school history. Oklahoma, backed by star Buddy Hield, will travel to Baton Rouge, Louisiana, to face America's top recruit, Ben Simmons, and LSU.

New Texas coach Shaka Smart and the Longhorns will host Vanderbilt. Former Texas coach Rick Barnes will lead Tennessee back to the Lone Star State for a matchup at TCU.

New Florida coach Michael White and the Gators will host West Virginia. Georgia will have a chance to secure a quality win when it faces likely top-25 squad Baylor in Waco.

The Big 12 won the first two Big 12/SEC Challenges, including last season's via a 6-4 edge.

With the move to late January, the Big 12/SEC Challenge will give college basketball fans a midseason set of must-see nonconference matchups, which are usually played in November and December prior to the start of the conference play.

Kentucky-Kansas will be the main attraction.

The two teams met last season when the Wildcats defeated the Jayhawks 72-40 in Indianapolis during the State Farm Champions Classic. Kentucky has a 21-6 advantage in the all-time series between the two programs.