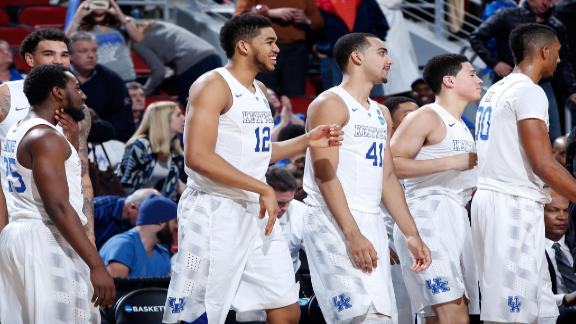 LOUISVILLE, Ky. -- Take away the sluggish start and the ragged finish, and top-rankedKentuckyopened the NCAA tournamentthe way it wanted against 16th-seededHampton.

Karl-Anthony Towns bounced back from a mini-slump with 21 points and 11 rebounds, Andrew Harrison added 14 points, and the Wildcats rolled to a 79-56 win over the outmanned Pirates on Thursday night in the Midwest Region.

Getting started took some doing for Kentucky (35-0), which was already resigned to the late tipoff. The Wildcats' wait became even longer asCincinnatifought to a 66-65 overtime winoverPurduein the preceding game.

That made for an uneven night as the Wildcats shook some cobwebs and seemed to tire late. Fortunately for Kentucky, it did what it needed in between.

"I didn't like how we started the game. I didn't quite like how we finished the game, but it is 1 o'clock at night," said coach John Calipari, who nonetheless called it a good win. "And we had an overtime game where the guys were hanging out in the locker room for an hour and half, so I'm going to chalk it up to that and move on."

One who seemed fresh throughout was Towns, whose game needed the jump-start.

Limited by foul trouble the previous two games, the 6-foot-11 freshman was forceful all night without getting careless in helping the Wildcats cruise to the site's most lopsided outcome of the day after three one-point finishes at the KFC Yum! Center.

"One thing I did tell them in the huddles," Calipari added, "you have to respect the fact that we're throwing you the ball every time down. And if you get double-teamed, you must pass it because you've got to respect the guys that are passing you the ball. So if we do -- and Hampton didn't trap, which is why he had all those baskets."

Hampton's Quinton Chievous shook off an ankle injury suffered in Tuesday's First Four upset ofManhattanto score 22 points with 10 rebounds. But the Pirates (17-18) were no match forKentucky after the first 10 minutes and trailed by as many as 35 midway through the second half.

"When you come with two 7-footers and bring two more 7-footers off the bench, it can begin to wear you down, and I think that was a problem for us," Hampton coach Edward Joyner Jr. said. "They just wore us down."

Though Kentucky had just three days of rest before beginning the final phase of its quest to become the program's first unbeaten national champion, the Wildcats benefited from having to travel just 85 miles west for their tournament opener. The home court of in-state archrivalLouisvillehas served them well in the tournament, providing the launching point for their lastNCAA title in 2012.

Kentucky had an arena full of blue-clad fans loudly cheering for more good fortune. Big Blue Nation was also patient, waiting through an overtime warm-up between Cincinnati and Purdue before the game finally started at 10:19 p.m. ET.

Hampton made things intriguing for a few minutes with a 4-3 lead and later a 9-all tie that pleased its contingent of fans. Kentucky took charge from there, gaining its first double-digit lead with about six minutes left in the first half and didn't look back.

It just took a little time.

"We just stay loose, walking around, just keep moving and just keep talking to each other," Towns said of the delay.

LOSS OF A FRIEND

Hampton: Deron Powers recorded both of the Pirates' assists, one in each half.

Kentucky: The Wildcats shot 46 percent, outrebounded Hampton 51-31 and controlled the paint 44-20. ... Towns and Cauley-Stein combined for all five Kentucky blocks.

Kentucky Puts On Clinic Against Hampton
Karl-Anthony Towns recorded a double-double in Kentucky's 79-56 win over Hampton.

Kentucky Remains Perfect
Eamonn Brennan discusses Kentucky's dominant victory against Hampton in the Round of 64 as the pursuit of perfection continues.

Kentucky Puts On Clinic Against Hampton
Karl-Anthony Towns recorded a double-double in Kentucky's 79-56 win over Hampton.