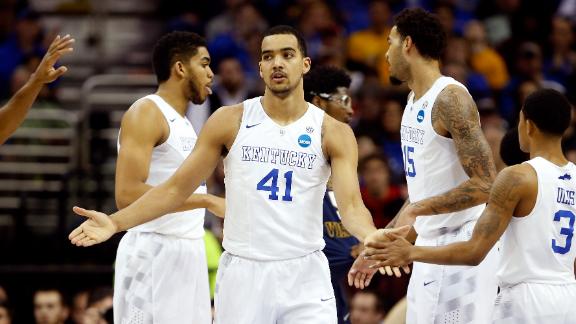 CLEVELAND -- Like a massive, unstoppable blue wave, Kentucky hit quickly and just kept coming. There was no escape for West Virginia, no place to hide.

The Wildcats were as advertised: too big, too strong, too everything. Just too good.

Trey Lyles scored 14 points, Andrew Harrison added 13 and the unbeaten Wildcats, chasing history and a ninth national title, made their 37th straight win look easy, blowing past the Mountaineers 78-39 Thursday night in the Midwest Regional semifinals of the NCAA tournament.

"They were what I thought they were," West Virginia coach Bob Huggins said. "That's the best defensive team I think that I've ever coached against. And when they're making shots, there's nobody going to beat them."

The tourney's top seed and an overwhelming favorite to cut down the nets next month in Indianapolis, the Wildcats (37-0) jumped to an 18-2 lead, built it to 26 in the first half and advanced to Saturday's regional final to play third-seeded Notre Dame, an 81-70 winner over Wichita State.

The Fighting Irish might need to call Rudy, consult with Digger Phelps, and wake up the echoes from some of those stunning upsets in football and hoops they have pulled off in the past.

Kentucky is a monster this March.

"They did what they had to do," West Virginia forward Devin Williams said. "You can't stop something that's destined."

With stunning ease, the Wildcats took apart the Mountaineers (25-10), who led the nation in steals and figured their full-court press would at least bother Kentucky into some turnovers. Not only did the press not work, West Virginia shot only 24.1 percent (13-of-54) against the Wildcats, who resemble a forest of blue-tinted redwoods inside the paint.

West Virginia didn't eclipse 20 points until the 11:41 mark of the second half.

The Wildcats were fueled by comments made Wednesday by West Virginia freshman guard Daxter Miles Jr., who predicted the Mountaineers would end Kentucky's title run. Some of the Wildcats said they wanted to win by 50.

"Well, that didn't come from me because that's not how I coach," Kentucky's John Calipari said. "I mean, what, someone's going to come in and say we're going to lose and they're going to say they're going to win. But we say at some point you have to step in the ring, we'll lift the rope, you've got to come in here."

At halftime, the Mountaineers had nearly as many fouls (14) as points (18), and there was no hint they would be able to cut into Kentucky's lead. The Wildcats, seeking to become the first team to go undefeated since Indiana in 1976, seemed to be sending a message to the rest of the tournament that everyone else is playing for second place.

Five years ago in the Elite Eight, West Virginia stunned a top-seeded Kentucky team that's a lot like this one, loaded with high school All-Americans and future NBA players. But the Wildcats weren't going to let that happen again, and they blistered the Mountaineers in the opening 20 minutes, leaving the court with superfan/actress Ashley Judd dancing along with the thousands who made the trip north to Cleveland.

Dakari Johnson scored 12 points and Cauley-Stein added 10 rebounds for Kentucky, which hasn't faced Notre Dame in the tournament since 1970.

West Virginia's players promised they wouldn't be intimidated by Kentucky's spotless record, the school's blue-in-the-face fans or championship pedigree. In fact, Miles took it further, saying, "They're gonna be 36-1."

Booker and the Wildcats took it one step further with tweets after the blowout win.

Kentucky's fans came prepared for a tougher matchup after easy wins over Hampton and Cincinnati to start the tourney. At The Corner Alley, a restaurant bar where UK's faithful gathered before tipoff, a T-shirt was being sold that said: "They Hate Us Because They Ain't Us."

And Huggins believes it's going to take something special for the Wildcats to lose.

West Virginia: The Mountaineers have made the Sweet 16 in six of their past nine NCAA tournament appearances. ... The Mountaineers came in 5-0 all-time in Cleveland, including 2-0 in NCAA games -- both in 2005 at Cleveland's Wolstein Center. ... Huggins has 765 career wins, 12th most in history and third among active coaches, trailing only Mike Krzyzewski and Jim Boeheim.

Kentucky: Aaron Harrison dislocated the ring finger on his left hand, but got it taped and returned. ... The Wildcats aren't just tall, but long. Kentucky's 13 scholarship players have an average wing span of 6-foot-10, and freshman Karl-Anthony Towns stretches 7-foot-3 from tip to tip. ... The Wildcats improved to 22-3 in NCAA tournament games under Calipari, seeking his fourth Final Four appearance and second national title.

Kentucky: Faces Notre Dame on Saturday in the Elite Eight.

Kentucky Destroys West Virginia
Jeff Goodman discusses the dominant performance from Kentucky in the Sweet 16, and he looks ahead to the Elite Eight matchup against Notre Dame.