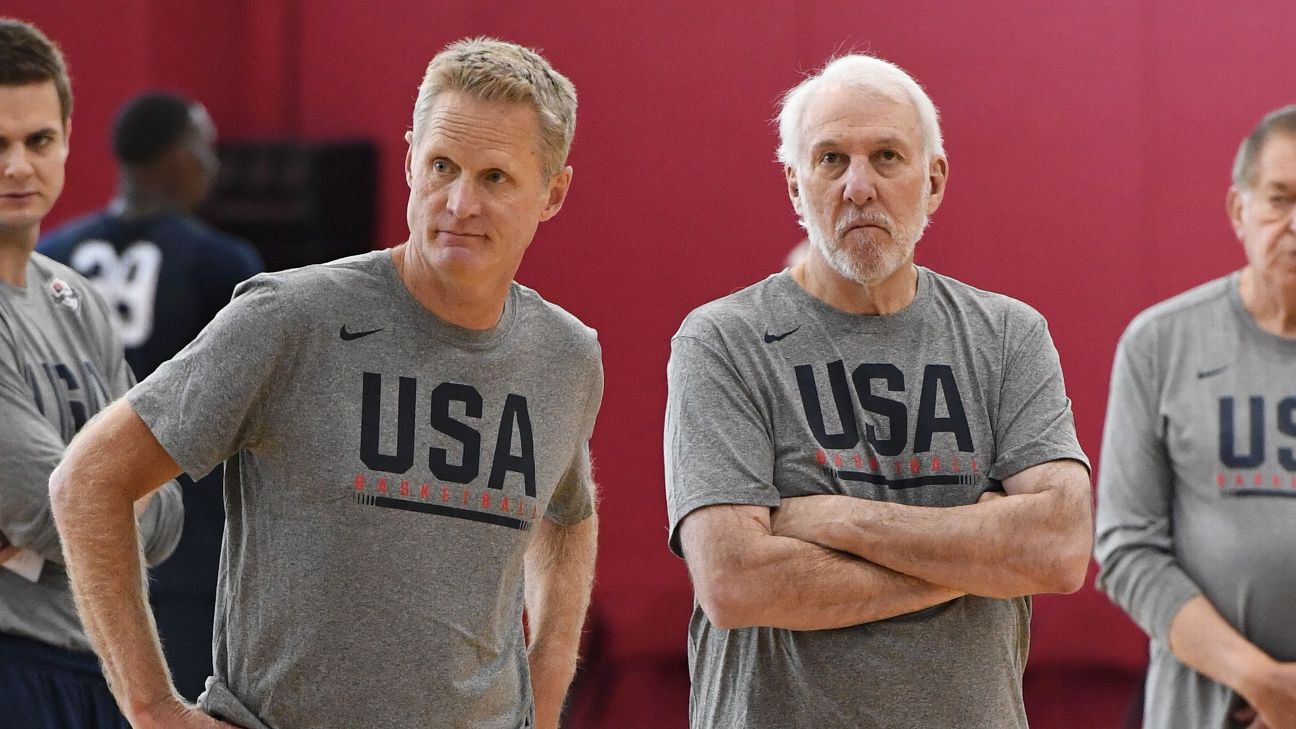 LAS VEGAS -- Golden State Warriors coach Steve Kerr says he thinks all the time about gun violence and mass shootings and how any day someone could walk into a basketball gym and shoot NBA players.

"When you have 97 percent of the people in the country who want universal background checks and the Senate, not only, not won't pass it, won't even vote on it because [Senate Majority Leader] Mitch McConnell won't allow them to vote on it because the NRA has bought him off, then you got problems," Kerr, an assistant coach for Team USA, said after its practice Tuesday ahead of the FIBA World Cup. "I think that's the issue. We have to have elected leaders who are willing to value human life over their own jobs and their contributions from the NRA."

"It'd be a lot better if the people in power got off their asses and got something done ... in a lot of different areas," Popovich said. "I think they're on vacation right now.

"Nothing going on, so they just take a break," Popovich added sarcastically. "They'll come back and fix the gun situation, the environment, inequality, pay, they'll fix all that when they come back, I'm sure."

Popovich and Kerr are among the most vocal sports figures when it comes to political issues and social inequality. Kerr has been personally impacted by gun violence. His father was a diplomat who was assassinated in Lebanon in 1984.

"I think about it all the time. Somebody could walk in the door in the gym right now and start spraying us with an AR-15," Kerr told the Bay Area News Group on Monday. "They could. It might happen because we're all vulnerable, whether we go to a concert, a church, the mall or go to the movie theater or a school. It's up to us as Americans to demand change from the gutless leadership that continues to allow this to happen and continues to somehow claim the Second Amendment is doing its job."

On Tuesday, Kerr was asked what he would say if he could talk to President Donald Trump right now.

"Nothing," Kerr said. "I wouldn't bother talking with him."

Kerr, though, believes this is a time to act and force change.

"I've always been outspoken in terms of gun safety and gun measures," Kerr said. "That is something that has been very important to me for a long time. I've gotten very involved with some of the gun safety groups, like the Brady Campaign and the Sandy Hook Promise and March For Our Lives, the Giffords group. These are all wonderful groups that are doing a lot of good things.