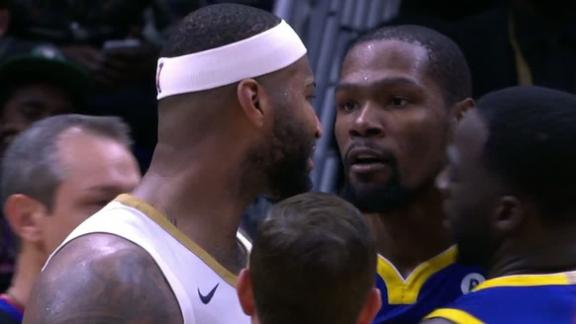 The pair, who had each earned a technical earlier in the game, started arguing with one another with 1:14 remaining in regulation as teammates had to stand in front of them.

Durant was critical of the officials' decision but was regretful for the sequence that led to his ejection. Cousins did not speak to media after the game.

Warriors coach Steve Kerr said he wants his team to show more composure in the wake of another "chaotic" win, in which Draymond Green was also assessed a technical foul for arguing in the first quarter.

"Yeah, absolutely too much," Kerr said of the extracurricular activities on the floor. "We're not composed out there. We're a championship team. We got to be poised and we got to execute out there. We're getting way too emotional. Myself included. I got to do a better job of that, too. We've got to show some poise when things aren't going our way and stop worrying about everything else and just worry about the game."

Kerr said composure will be a further topic of discussion for his team this week.

"I didn't say anything pregame," Kerr said. "Maybe I should have. But yeah, we're going to definitely talk about it the next couple days."

Durant acknowledged he has to take it upon himself to be more composed.

"Early in the game we got a couple techs just arguing with the refs," Durant said. "I think that took us out of the game just a little bit. We got to just stay poised in those situations. And myself, I can't get involved in that type of stuff. I just got to stay locked in and stay focused on the game, and what's most important is the game. I'm not going to fight nobody."

Durant made it clear he doesn't want the penalties that may come with any potential arguments with opponents or officials in the future. He knows he has to keep a cooler head when needed.

"I don't want to get injured," he said. "I don't want to get suspended. I love to play, I love making money for my family. So I'm not trying to get suspended, I'm not trying to get in no fights with nobody. Nobody on the floor is going to fight. Nobody in the NBA is going to throw no punches. We're just talking, we're just getting into it. It's a heated matchup, it's a heated conversation, and we said what we had to say and moved on. If it escalates, we got so many people that can get in between us and prevent us from doing anything stupid because we're grown men, we don't want to get into nothing. It is what it is; we're both going to stand up for ourselves, and that's what happened."

Warriors veteran David West thought his team handled itself well during a chippy game in which the Pelicans got off to a 69-49 halftime lead.

"We don't start it," West said. "Usually it's the other team, we know we're going to get everybody's best shot. There are times when you're only going to take so much -- jaw jacking, saying this, saying that. Again, I don't think it's really us who's really starting it. We play with a lot of emotion, we've got guys who play with emotions on their sleeve, along with the right intent to play the game the right way. But guys are going to stand their ground and respond."

The Warriors, who were already playing without Shaun Livingston (suspension) and Zaza Pachulia (shoulder) may have to find their calm without Stephen Curry for a stretch now. Curry sprained his ankle just moments after Durant and Cousins were ejected and left the arena on a walking boot and crutches.

Warriors emotional leader Green knows his team will stick together no matter what happens.