Kevin Durant on NBA career: 'It's been like a movie' 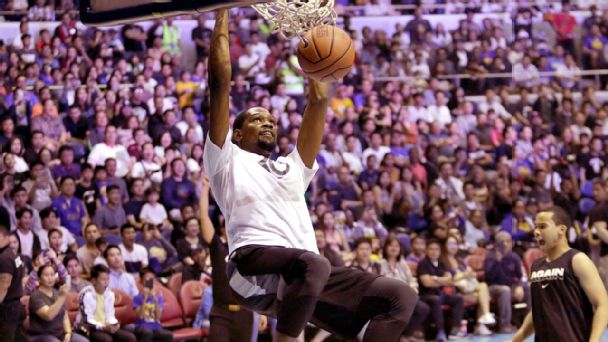 Back-to-back NBA Finals MVP Kevin Durant spoke of his new KD11s, being excited about the arrival of All-Star pivot DeMarcus Cousins on the Golden State Warriors roster and how his journey in his 12-year NBA career has been "like a movie" when he met with members of the Philippine media at White Space Manila on Sunday before enthralling a packed Smart Araneta Coliseum crowd in a live scrimmage as part of his Asian swing for the "Rise. Grind. Shine. Again" tour.

Fresh off a successful sortie in Guangzhou, China, the 7-foot nine-time NBA all-star out of the University of Texas was amazed at his warm reception and how hoops crazy this country is.

"You can feel the energy, the love for basketball [here]," Durant, the former second overall pick in the 2007 NBA draft said. "Just walking around and seeing people talk about basketball. It's been great thus far and I'm looking forward to the next couple of days and try to meet more (Filipino) basketball fans."

Durant helped the Warriors to consecutive NBA titles and called Game 4 of the Finals a "masterpiece".

"I'd just like to sign off on a perfect piece of art; a perfect canvas" he said. "I felt like that was Game 4 of the Finals. We created this amazing masterpiece throughout the season. Now we can just chill and let it dry a bit, which is the whole summer, and get back to it again for next season."

On July 2, Durant claimed it to be a great day for his franchise as the Golden State Warriors signed Cousins, who after LeBron James was considered to be among the most coveted free agents in the league.

"July 2nd, things kind of changed for us by adding someone like DeMarcus on our team," Durant beamed. "We're all very excited about what he brings and it's going to be a fun year for us. We need some injection of energy and I think DeMarcus is going to provide that for us."

Durant, who owns the distinction of being in a select few that have won both NBA Rookie of the Year and MVP, admits that his career has been a blessing and that he still sometimes thinks he's in a movie with the way basketball has changed his life.

"It's been like a movie," he said. "So many different emotions going through this journey. I'm just grateful that I've gotten to do so much with the game of basketball and it's (been) there to change my life forever. It's just been amazing."

Later on, Durant was joined on stage by Nike designer Leo Chang, who has helped Durant craft his signature shoe since he was signed during his rookie year. Chang had just moved to the basketball side of the footwear giant from the running brand when he started working with Durant.

"I remember I first met KD in Vegas during the USAB camp when he was trying out," Chang recalled. "I was also a rookie in the basketball side and we've been on the journey together ever since."

Chang went on to discuss about the details of the new KD11s, saying that Durant wanted that "broken-in" feel even if it were fresh out of the box. KD wanted a shoe that feels good under casual conditions but can quickly transition to actual playing shoes if the need suddenly arises.

The KD11s were immediately put to the test later on when some of the young talent in the country took to the Big Dome hardcourt in an exhibition match wearing the new Nike release.

Durant suited up and played alongside the likes of CJ Perez, Juan and Javy Gomez de Llano, Hubert Cani, Wendell Comboy snd and RJ Ramirez while the opposing side had UAAP stalwarts such as Thirdy Ravena, Paul Desiderio, Adrian Wong, Jolo Mendoza and Aaron Black, among others.

Durant struggled from the field but gave the thousands in attendance a thrill from his dunks and ball handling prowess to try and match the explosive rim-rattlers from Perez, JDL, Ravena and Raffy Verano.

The UAAP selection took a three-point win as Durant posed for pictures with not only the players, but with members of the audience as well--that included a multitude of Philippine basketball personalities such as Chris Newsome, RR Garica, Alaska assistant coach Jeffrey Cariaso and broadcaster Wesley Gonzales.

After his Manila leg, Durant is slated to fly to Taipei and continue the tour before heading back to the US for their title defense preparations.

But he will be leaving the country with his latest signature shoe officially in the market, and those who got to take in the experience of watching a bonafide NBA star in the flesh will remember Durant for his candor, willingness to pose for pictures and a demeanor fit for a humble superstar.