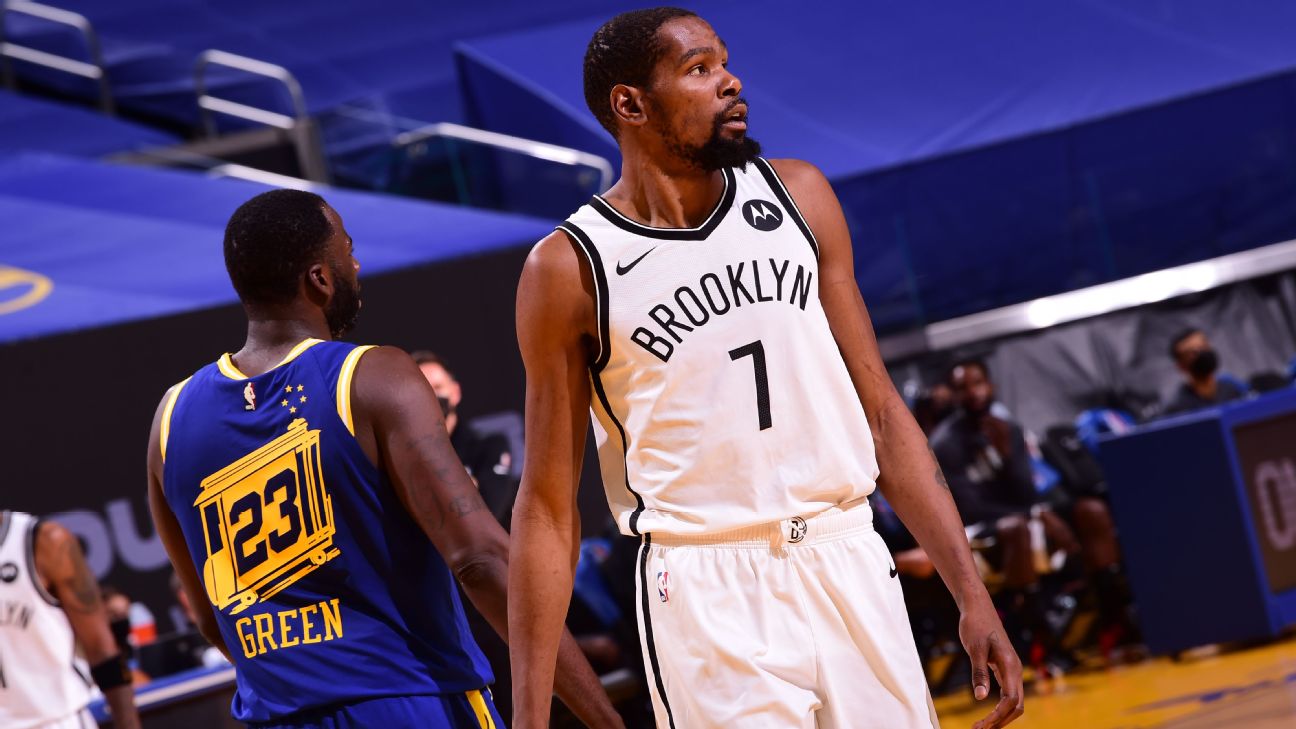 There might not have been an arena full of fans to welcome Kevin Durant back to the San Francisco Bay Area, but the Golden State Warriors greeted their former star with hugs, applause and a tribute video on Saturday night.


"We came out and played a great game," Durant said of his victorious return. "We were focused from this morning in shootaround, and it was a good vibe all day."

Before the game, Nets coach Steve Nash said that while he believed the contest against Durant's former team carried extra weight for him, the former league MVP hadn't shown it.

"We haven't talked about it," Nash said. "If there's ever a comeback game that is less than what it may have been in a normal situation, it's this one where we have no fans, it's getting closer to two years from his last game here. So it's not gonna have the same -- I don't think -- rawness that sometimes these games can present, but I still think it means something to him."

Durant, who played for the Warriors for three seasons, finished with 20 points on Saturday. James Harden added 19 points and 16 assists. Kyrie Irving led the way in scoring for Brooklyn with 23 points. All five of the Nets' starters finished in double figures.

During a first-quarter timeout, a tribute video played in Chase Center, thanking Durant for his tenure with Golden State. During his three years with the Warriors, the team won two NBA championships, and Durant was named Finals MVP twice.

"Tribute video was cool. I think about those moments daily," Durant said. "Every single moment that I have had in this league, I think about it and try to analyze it and get better. My time here in Golden State was so much fun. It was such a big learning experience, especially learning basketball in a different philosophy. I'm gonna take that with me for the rest of my life."


A team spokesman said the Warriors intend to play another thank-you video for Durant next season, when the team plans on having fans in back in the arena.

"This is something that is such a no-brainer. When Kevin came here and gave us three years of just incredible basketball, the least we could do is welcome him back with open arms,'' Warriors coach Steve Kerr said. "... A guy that gave everything to us for three years then left with a devastating injury. There should be a lot of love, he did so much for us.''

After building a 15-point halftime lead, a 42-point third quarter propelled the Nets to a 108-82 lead entering the fourth. Their 26-point advantage was the Nets' second-largest lead of the season through three quarters, according to ESPN Stats & Information research.

The Nets' largest lead heading into the fourth quarter this season -- by 28 -- also was against the Warriors, on opening night in Brooklyn.

The Nets' Big Three of Harden, Durant and Irving scored or assisted on 100 of Brooklyn's points on Saturday. Brooklyn had lost three of four but welcomed back Durant after he was out for the past three games under COVID-19 quarantine protocols.

Durant missed last season following surgery for a torn right Achilles tendon he suffered in Game 5 of the 2019 NBA Finals with the Warriors. It's the same injury Klay Thompson is sidelined with now -- and Durant has been in regular touch with Thompson, who watched courtside on Saturday.


"Can't wait to see him back out there,'' Durant said of Thompson.

Durant walked onto the court for pregame warm-ups and greeted all his friends. He and Curry were concentrating on their warm-up routines, until the two-time MVP stopped to say hello as Durant stretched on his back at midcourt. Durant and Warriors forwardDraymond Green also hugged before tipoff.

As Durant exited the court following the contest, he gave hugs and handshakes to former teammates and Warriors coaches.

Green said afterward that he sees Durant and the Nets as a threat to make a deep postseason run.

"They're the team to beat in the East, if you ask me," Green said. 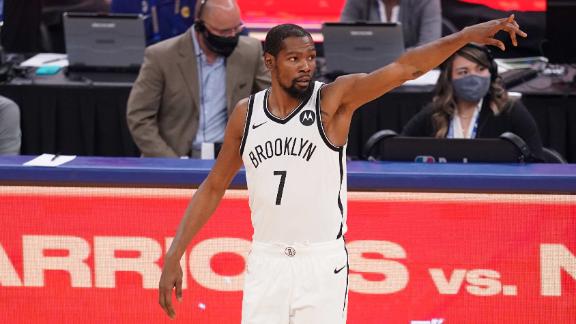