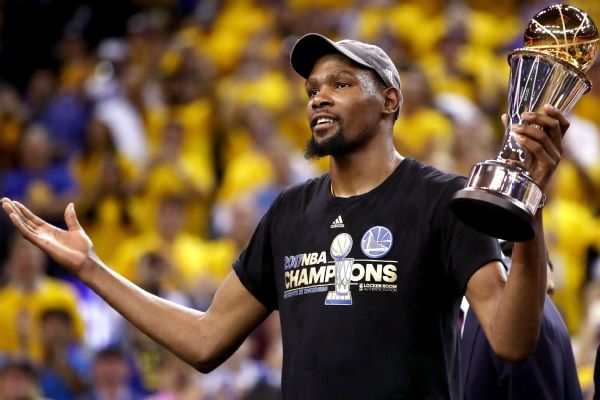 ESPN
By Chris Haynes
Golden State Warriors All-Star Kevin Durant will visit India next Thursday to further fortify the growing popularity of basketball in the country and serve as a coach to some of its top players.

The first order of business for the NBA champ and 2017 Finals MVP will be stopping in New Delhi to donate two new basketball courts to the Ramjas School as part of the Kevin Durant Charity Foundation.

The eight-time All-Star will then travel to the NBA Academy India in Noida. That's where he'll instruct prospects in a series of basketball drills, in addition to conducting a massive youth clinic with approximately 5,000 male and female participants from the Reliance Foundation Jr. NBA program.

Durant, who last month led the Warriors to their second championship in three years by defeating the Cleveland Cavaliers in five games while averaging 35.2 points, 8.2 rebounds and 5.4 assists, will be the first active NBA player to visit the academy.

"I'm excited to travel to India to help promote the game of basketball and meet the prospects at the NBA Academy India," Durant said. "I've wanted to visit India for a long time, and I can't wait to experience the country's unique culture and share my knowledge with the kids there."

"We are thrilled to host 2017 Finals MVP Kevin Durant in India," Colaco said. "Kevin is coming off an historic season with the Golden State Warriors. Having one of the very best players in our league interact with the basketball-playing youth of India will serve as great inspiration to the next generation of players here, especially the high-performing prospects at the NBA Academy India."

The NBA Academy India, which opened in May, "employs a holistic, 360-degree approach to player development with focuses on education, leadership, character development and life skills," according to an official release. "As part of the program, the students compete against top competition throughout the year and have an opportunity to be selected for travel teams that play in international tournaments and exhibition games."