Kevin Hogan in at QB for Browns after Cody Kessler concussed 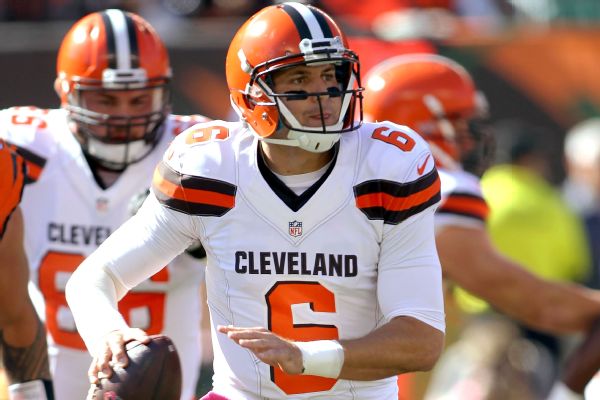 CINCINNATI -- The Cleveland Browns lost rookie quarterback Cody Kessler to a concussion with 7 minutes, 27 seconds left in the first half of Sunday's 31-17 loss to the Bengals.

Rookie Kevin Hogan took over for Kessler. Earlier in the game, Hogan became the sixth quarterback in seven games this season to take a snap for the Browns when he ran three read-option plays.

But when Kessler was sidelined, the game belonged to Hogan. He followed Robert Griffin III, Josh McCown, Terrelle Pryor, Charlie Whitehurst and Kessler at quarterback.

Hogan finished 12-of-24 for 100 yards and two interceptions in the Browns' loss, which kept Cleveland (0-7) winless this season.

"These quarterbacks only have so many these hits in their body, you know? Pretty soon, guys don't get up all the time, and that's what's been happening. It's unfortunate. It's just been happening way too much," Browns coach Hue Jackson said.

Hogan spent the first five games of the season on the practice squad. He was promoted to the active roster Oct. 11 after Whitehurst was injured.

"He battled as hard as he could for a guy that, again, doesn't get a ton of reps, but enough to do what he did," Jackson said.

Jackson added that "there's a chance" McCown will be able to play next Sunday against the New York Jets.

"We'll see. Again, we'll evaluate everything on Monday and see where he is and go from there," he said.

Kessler had played better than expected in starting five games; he was 9-for-11 against Cincinnati before he was hurt.

Hogan said, "there were some plays I'd like back, but overall I felt very comfortable out there, and confident."

Hogan said he hopes Kessler "makes a speedy recovery" but he is "going to do everything I can to make sure I'm ready."

According to the Elias Sports Bureau, the Browns are the first team since 1987 (Eagles, Patriots and Broncos) to have at least six different players throw at least one pass in the first seven games of a season.

That was during the strike season that featured replacement players.

The last team to use six quarterbacks in the first seven games in a non-strike season was the 1976 Tampa Bay Buccaneers, who went 0-14 in their first NFL season.

Cody Kessler leaves game with concussion
Browns QB Cody Kessler leaves the game in the second quarter against the Bengals after suffering a concussion. Kessler would be replaced by rookie Kevin Hogan, who became Cleveland's sixth quarterback to take a snap in seven games this season.