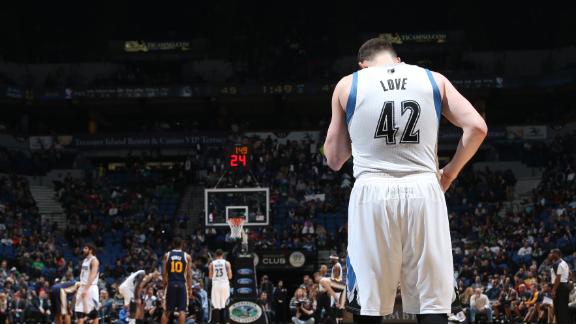 Minnesota Timberwolves forward Kevin Love said Wednesday that it "burns me and hurts my heart" that he hasn't made the playoffs in six seasons in the NBA.

But Love stopped short of confirming that he's determined to opt out of his contract and become an unrestricted free agent in 2015.

"My agent is handling everything at this point ... I'm hoping that everything works out for all parties involved," Love said during an appearance on ESPN's "SportsNation."

Love's comments were the first since sources reiterated to ESPN.com last week that team president Flip Saunders' move back to the bench next season will have no impact on Love's decision.

"No matter what the outcome is, I just want to end up in a great place where I can win," Love said on "SportsNation." "At the end of the day, I've played six years, haven't made the playoffs yet, that burns me and hurts my heart, so I really want to be playing."

Saunders told a Minneapolis radio station earlier this week that Love "didn't have a right" to be frustrated.

"Flip's a great guy," he said. "He was great for us last year when [Rick] Adelman was the coach, bringing us all together. It was his first time back with the team, and now he's taking over the coaching reins, and I congratulated him, talking with him, back and forth, and when he says something like that, same as when Ricky talked about me being a leader, I just continue to work hard, keep on the grind, and use some of it as fuel ... but what they said, it holds true, some of it."

One place Love is rumored to be interested is the New York Knicks.

"I think any time you have Phil Jackson involved in any organization, you're going to definitely look at it and it's definitely intriguing," Love said. "The Knicks are definitely a place where anybody would like to go."

Love was asked if he could be the best player on a championship team. "I think so," he said.