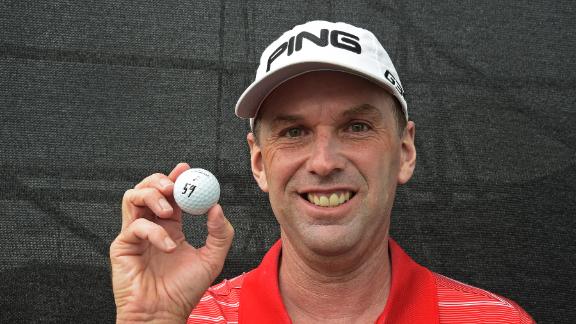 ENDICOTT, N.Y. -- Kevin Sutherland was only eight holes into his round Saturday at the Dick's Sporting Goods Open and already thinking about a 59.

"You're not supposed to do that, are you?" he said.

The way this magical round went, nothing was going to stop him. Sutherland became the first player in Champions Tour history to shoot a 59, and it might have been even better except for a three-putt bogey from about 40 feet just off the 18th green.

Six players have shot 59 on the PGA Tour, including Paul Goydos, Sutherland's best friend on tour. Goydos was among several players who stood behind the 18th green to watch Sutherland complete a round that was practically flawless until the end.

"Honestly, the ovation I got on 18 ... I know Jack Nicklaus and Arnold Palmer are used to that stuff, but to see all those guys behind the green, I couldn't believe it," Sutherland said. "So when they stood up, everybody stood up around the green and was clapping, I got some chills. I think that's what I'm going to remember most."

The 59 gave Sutherland a one-shot lead over Steve Lowery going into the final round. He was at 14-under 130.

Sutherland, playing in only his third Champions Tour event since turning 50 in June, recalls asking some of the players at the start of the week if anyone had ever shot 59 on the senior circuit and was surprised it had not been done.

He would not have seemed a likely candidate. Sutherland's career-low round on the PGA Tour was a 62 in the 2010 Canadian Open. Even at home in Sacramento, California, he never seriously came close to golf's magic number.

On Saturday at En-Joie Golf Club, he couldn't miss.

Sutherland opened with four straight birdies -- two of them longer than 30 feet -- and hit hybrid into 6 feet for eagle on the par-5 fifth hole. He ran off three more birdies, including a bunker shot he holed on No. 7 that hit the pin instead of rolling 10 feet away.

"When I was 9 under after eight I was like, 'That goes beyond being a good start,' " Sutherland said. "At that point I started thinking, 'What do you have to do to shoot 59.' I started thinking maybe earlier than you should be, but it worked out all right."

Not only did the gallery begin to grow, Sutherland said the players ahead would watch him hit into the green. He made a 35-foot birdie putt on No. 11 for his second straight birdie, and then settled down for three straight pars.

"It got to the point where I didn't want to disappoint them," Sutherland said. "I had a 10-footer on 13 and missed it, and you would have thought I stole their young. They were really into it."

He drove onto the par-4 16th hole for a two-putt birdie to reach 13 under, and then he stuffed his approach to tap-in distance on the 17th, leaving him a par away from 58.

Lowery had nine birdies in his round of 65. John Cook had a 67 and was two shots behind. Cook was on the sixth tee when he heard about the 59.

Sutherland, even though he has a piece of history, wants the trophy. His lone win on the PGA Tour was the 2002 Match Play Championship at La Costa.

"I'll try to forget tomorrow what I did today," he said. "Because that could be pretty difficult to compare."