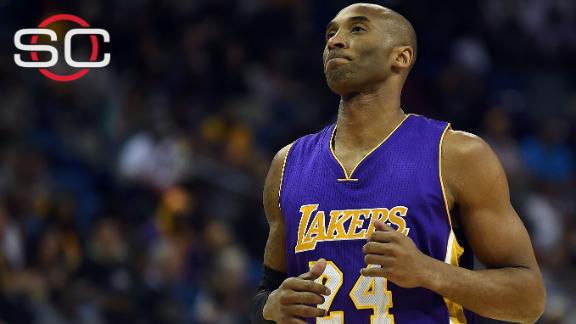 ESPN
By Baxter Holmes
Nearly nine months after suffering a torn rotator cuff in his right shoulder, Los Angeles Lakers star Kobe Bryant has been medically cleared to participate in all basketball activities, an NBA source confirmed to ESPN.com on Thursday.

Bleacher Report first reported that Bryant had been cleared.

The 37-year-old suffered the injury while dunking in a late-January game against the New Orleans Pelicans. After surgery, it was expected that Bryant would need nine months to recover from his third straight season-ending injury. His prior two seasons were cut short by Achilles and knee injuries.

Lakers general manager Mitch Kupchak recently told USA Today that he expected Bryant, who is entering his 20th season with the Lakers, to be ready for the team's training camp, which will take place in Hawaii beginning at the end of September.

Bryant averaged 22.3 points, 5.7 rebounds and 5.6 assists in 35 games before his injury, but he made a career-worst 37.3 percent of his shots in a wildly inconsistent 19th NBA season.

He is in the final year of his contract with the Lakers, during which he'll be paid a league-high $25 million. He has said that he'll decide if he wants to retire after this season.