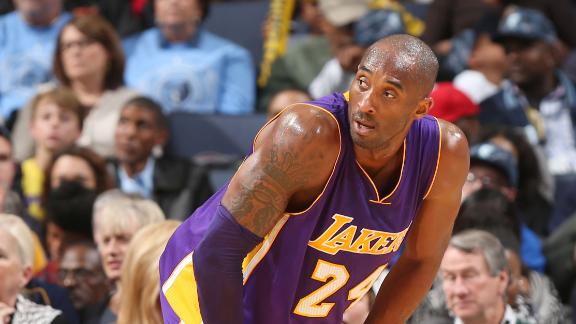 The Los Angeles Lakers star set the mark with 6:22 left in the fourth quarter of a 107-102 loss to the Memphis Grizzlies. He missed a 14-foot fadeaway jumper from the left side, giving him 13,418 career missed field goals, one more than Boston Celtics legend John Havlicek.

Asked about the record, Bryant, who scored a game-high 28 points on 10-of-26 shooting and finished with 13,421 misses for his career, smiled and said he wasn't aware of it.

How does he explain setting the mark?

"I don't care about it, to be honest with you," Bryant said. "It is what it is. I remember when I was a kid and I watched Michael shoot 49 times in an NBA Finals game. Can you imagine if I did that and lost? Puts things in perspective."

Bryant has missed at least 20 shots in 44 games, the fourth-most such games in NBA history, according to the Elias Sports Bureau.

Havlicek had 25 such games in his career, 10th all time.

"You've got to go out and figure that out and play and do the best you can, and whatever happens, happens. You can't be held captive by the fear of failure or the fear of what people may say."

Lakers coach Byron Scott wasn't all that interested in talking about the subject when asked at the team's shootaround, cutting off a reporter during a question about it.

"I don't care about that crap, and I'm sure he doesn't, either," Scott said. "I don't mean to cut you off, but to me it speaks of his aggressiveness and his longevity."

Scott defended Bryant against critics who say the shooting guard shoots too much.

"It's almost damned if you do, damned if you don't. The games that he don't take shots, people ask why didn't he take more shots," Scott said. "He can't win neither way, which is unbelievable to me for a guy who gives it everything he's got every single time he's on the floor.

"It's unfortunate because he is one of the greatest competitors that we've seen in a long time. I take all that stuff with a grain of salt and I'm sure he does, too, because the bottom line to him is championships."