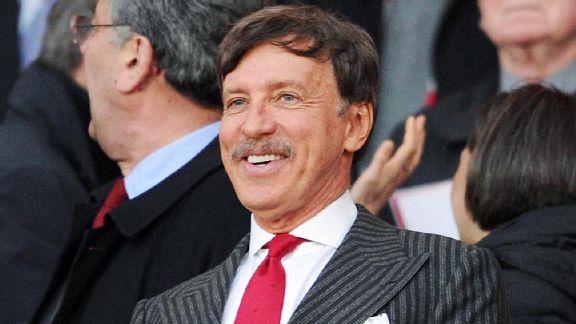 St. Louis Ramsowner Stan Kroenke doesn't need to partner with a second team to finance the $1.86 billion venue in Inglewood, but the league considers Los Angeles a two-team market and wants a stadium that could accommodate both, according to the Los Angeles Times.

His plan competes with one by the San Diego Chargers and Oakland Raiders, who want to share a stadium in Carson.

NFL commissioner Roger Goodell told The MMQB.com that his first preference would be for the Rams, Chargers and Raiders to work something out with the cities where they currently play.

"Our first objective will be to make sure that those markets have had the chance to get something done -- that they can get a stadium built to secure the long-term future of their franchise," he said.

"San Diego has been working 14 years on a new stadium. Oakland is not in a new debate either, for the A's or the Raiders. Same with St. Louis. ... These are long debates about what is the right solution for the community and what is best for the team. We're looking to see if we can create those solutions locally. If we can't, we obviously have to look at long-term solutions for those teams."

Kroenke hasn't said he plans to move the Rams, but analysts doubt he would invest in a stadium and not use it for his team.

The Times reported details of the stadium's design as league owners prepared to gather for meetings on Monday in Phoenix, and shortly after, the Chargers and Raiders offered their rival plan. Any franchise would need the support of three-quarters of the league's 32 owners to move to the nation's second-largest market, which hasn't had an NFL franchise since 1994.

St. Louis businessmen Dave Peacock and Bob Blitz, who are heading up Missouri Gov. Jay Nixon's task force to get a new stadium built in the city, are not expected to present their plan to owners this week in Phoenix despite speculation that they would.

Renderings for the privately funded venue show a light, metallic, wave-shaped structure featuring a roof that encompasses the stadium and a surrounding plaza. The roof has metal borders, but the area over the playing field is made of a transparent material called ETFE, which is as clear as a car windshield and strong enough to support the weight of a vehicle.

While the roof of the stadium would be 275 feet above the playing field, the building would be set into the ground, giving it an aboveground profile of 175 feet, lower than most enclosed stadiums. The proposed venue conforms to the height restrictions imposed on buildings close to Los Angeles International Airport.

The Times said the roof gives Kroenke the ability to create a billboard visible to more than 35 million travelers who fly in and out of Los Angeles each year.

Loading docks, mechanical yards and other infrastructure would be below ground and accessible via tunnels located near the stadium. Counting the underground and surface parking, 9,000 spaces would be dedicated to the stadium alone, with others in the nearby office and retail buildings.

HKS, Kroenke's architectural firm and the designer of stadiums for the Dallas Cowboys and Indianapolis Colts, estimates the project would take fewer than three years to build.

Meanwhile, speaking at the owners meetings in Phoenix on Sunday, New York Giants owner John Mara addressed the league's NFL vacancy, saying, "I think there will be one or two teams playing in L.A. next year." But he didn't specify to ESPN.com which teams they would be, nor address in depth any preferred sites for a new stadium.

Goodell, asked by The MMQB.com whether he had a "gut feeling" that the NFL would be back in Los Angeles in 2016, said he didn't know.

"I'm not relying on my gut, I guess. I'm relying on if there is a real alternative where we can return to the market successfully for the long-term; that is the biggest priority in Los Angeles. And the other one is obviously making sure that we're doing whatever necessary in the local markets to keep our teams successful and give them every opportunity to create a solution that works for the team long-term," he said.