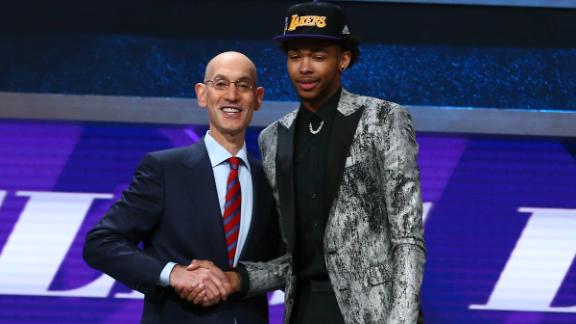 But after a franchise-worst three straight seasons spent missing the playoffs, after posting a franchise record for losses in three straight years, and after three straight offseasons in which all their top free-agent targets have turned down the Lakers, the team's hopes of obtaining Durant have seemed like little more than a pipe dream.

As of Thursday, though, the Lakers have now obtained a player who's compared to Durant, at least in terms of build, size and outside shooting. Los Angeles selected Duke freshman Brandon Ingram with the No. 2 overall pick in the 2016 NBA draft.

The 6-foot-9, 190-pound Ingram boasts a 7-foot-3 wingspan and a 9-foot-2 standing reach and is accurate from long range (41 percent from 3-point range at Duke), hence the parallels to Durant.

But, as was the case when Durant was drafted out of Texas in 2007, there are concerns about Ingram's frail frame. Ingram weighed 169 pounds the summer before his freshman year at Duke but bulked up to 190 by the fall.

"Obviously, it's unfair," Lakers general manager Mitch Kupchak said of comparisons between Durant and Ingram. "I can see why people would make that comparison. I think they're both gifted players. If you looked at Kevin in college as a freshman, the similarities are striking in terms of size and body build and body type. But beyond that, Brandon has a long, long way to go.

"Having said that, we're ecstatic to have him."

After his private, pre-draft workout with the Lakers in June, Ingram, who will be 19 when the 2016-17 NBA season begins, told reporters that he plans to "eat everything I can" and that he's confident his body will mature and fill out in time.

"I don't think it bothers me at all, actually," Ingram said in a conference call with Los Angeles media after being drafted. "I think it just gives me motivation. It shows these guys that the skinny part doesn't matter. It got me here today. I was the No. 2 pick, of course. Being skinny didn't mean nothing when I was battling each and every guy each and every night."

Rookie Lakers head coach Luke Walton, who was recently an assistant with the Golden State Warriors, said he's not concerned about Ingram's weight.

"He's young. He'll naturally get stronger," Walton said. "Talking to some of the coaches that were here when he came and did his workout, even though he's skinny, he had strength to him in the individual workout that he did.

"He's coming in as a young kid in a man's league. Obviously we're going to expect him to have an impact for us this season, but we'll kind of take that as it goes."

Kupchak said that along with working out Ingram, members of the Lakers' brass took him to a pair of dinners, and during the second dinner, several young Lakers players joined, including guards D'Angelo Russell and Jordan Clarkson, swingman Anthony Brown, and forwards Julius Randle and Larry Nance Jr.

"They all got along well, so that was good," Kupchak said.

At Duke, Ingram averaged 17.3 points, 6.8 rebounds and 2.0 assists per game, proving to be a versatile defender and skilled passer. He totaled eight double-doubles and 11 20-point games, the third most by a Duke freshman, and was named the consensus ACC freshman of the year. He also became the second Duke player to record 80 3-pointers and 40 blocks in a season (Shane Battier in 2000-01).

"I guess if I had to pick one thing, it would be potential," Kupchak said of Ingram. "Now, we're not picking a player that hasn't played much and kind of came off the bench and you're kind of trying to project what he might turn into. He played at what some might say is a very established college basketball program. He played big minutes. He started in an excellent league with excellent competition.

"In that regard, there's been a lot that's already been proven, but we look at him and his age and his body type, his willingness to work and be coached. So we think the upside and the potential in him -- right now, there is no ceiling on him. But, to date, he's had a pretty good career in a pretty good conference for a one-year player."

When the Lakers landed the No. 2 overall pick at the draft lottery in late May, Kupchak pointed out how the Lakers needed help in their frontcourt, "whether it's a wing or a bigger [shooting guard]," and Ingram certainly fills that role.

With his mobility, Ingram would also seem to fit into the new up-tempo system that Walton said he wants to implement.

"His ability to make reads on the court defensively is one of the favorite things I've seen him do, whether that's switching onto different players or coming from the weak side and blocking shots," Walton said. "A lot of that is timing and it's tough to coach. Kids that are really good at it have a knack for doing that. We had a kid up in Golden State,Draymond [Green], who we didn't coach him [on] how to be such a phenomenal team defender. He just was, because he sees the game like that. It means that the player is pretty intelligent. I think that Brandon fits that mold."

Said Ingram: "I know Coach Walton is a player's coach, and watching what he did with the Golden State Warriors, it was very amazing and great. I just want to come in and make a big impact."

Ingram joins a core of promising young players, including Russell, Clarkson, Randle and Nance Jr., all of whom are 24 years old or younger. Ingram figures to be the team's new starting small forward, the position Bryant held in his 20th and final season before retiring.

"We're excited," Kupchak said. "I think despite the fact that we're losing an icon that's been with us for 20 years, this is a new chapter going forward. We're going to miss Kobe to no end. I still look back on it, and it's hard for me to imagine that he's not going to be on our roster and not on the board in my office. Having said that, we have to move on."

Said Walton: "I'm not putting expectations on it. It is a young core. I think this now gives us seven players under contract, so there's a lot that still needs to be filled out, but to me, I'm putting the focus on how hard we're working, how the staff is helping improve them individually, how we're getting them to buy into the system and the culture that we're trying to create here. Those are things that I feel like if you focus on the wins will just start coming."

Ingram said he tuned in to Bryant's final season.

"I just love that he still had it," Ingram said. "Of course, that's Kobe Bryant. He took no nights off and had an amazing work ethic. I hope I can be like him some day."

Asked to name his favorite team, Ingram joked, "Of course, the Lakers." He then admitted that he loved the Seattle SuperSonics when they drafted Durant, then loved the Thunder. His favorite player, obviously, was Durant.

A native of Kinston, North Carolina, which has produced other NBA players such as Cedric Maxwell, Jerry Stackhouse and Reggie Bullock, Ingram won four consecutive high school state championships with the Kinston Vikings.

Walton said he had seen Ingram play during the tournament.

"You can tell pretty quickly when a kid is that special, what he can do on the basketball court," Walton said.

Kupchak said he's hopeful that they'll introduce Ingram to Los Angeles media in a week and then have him play on the Lakers' summer league team in Las Vegas in mid-July.

The Lakers received plenty of calls from other teams about the No. 2 pick, but, Kupchak said, "nothing piqued our interest."

Would they still have taken Ingram if they had the top overall pick? Kupchak said it was hard to say because Ben Simmons, who was drafted first overall by the Philadelphia 76ers, wouldn't work out for the Lakers.

However, Kupchak added, "Going into it, based on what we felt, we felt we'd be very lucky to get Brandon into this city and into this organization."