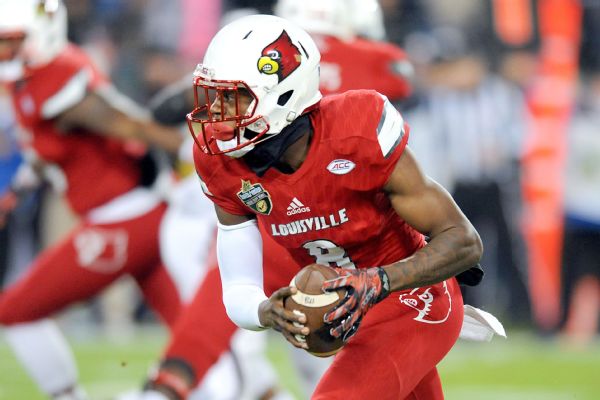 The Maxwell Award is given to the college player of the year, while the Davey O'Brien Award is awarded to the nation's best quarterback. Jackson and Watson are among the five finalists for the Heisman, the sport's most prestigious individual award, making a two-man race out of what was thought to be a near-certain win for Jackson.

"To win [the Maxwell] award means a lot. Being the first one to ever do it at the University of Louisville, I'm in shock right now," Jackson said. "I have butterflies. I ain't never had them before, besides my first time playing football."

Jackson beat out Oklahoma quarterback Baker Mayfieldand Michigan do-everything linebacker Jabrill Peppers-- both finalists for the Heisman -- for the Maxwell. Jackson, a sophomore, became the first Louisville player to win the Maxwell and was the second player in FBS history to pass for 3,000 yards and rush for 1,500 yards in the same season since Northern Illinois' Jordan Lynch in 2012. Jackson also set the ACC single-season record with 51 touchdowns this season.

"I have to give all my credit to my mother," Jackson said onstage after accepting the award. "She's a great mother, a father figure, loved me, helped me out a lot. I'm blessed."

Jackson has passed for 3,390 yards and 30 touchdowns this season.

Watson joined BYU's Ty Detmer, Florida's Danny Wuerffel and Oklahoma's Jason White as the only two-time winners of the O'Brien Award. Each of the three also won the Heisman in one of those seasons. Watson also became the first quarterback in ACC history with 35-plus passing touchdowns in two different seasons. This season, he led the ACC with 3,914 passing yards and 37 passing touchdowns.

Asked about the Heisman possibly coming down to himself and Watson, Jackson said of Clemson's QB, "He's a tremendous player himself. He's done lot of great things. If he does (win the Heisman), oh well. Best man.''

While Watson thought he should win the Heisman on Saturday, he wasn't ready to campaign for himself over Jackson.

"I really don't get too big into all that," he said. "Whoever wins it really deserves it. At the end of the day, we both did some great things for our teams."

"Next Thursday at this time, I will have a degree in hand and be a graduate," he said. "It feels great."

One person who would vote for Watson if given the chance is Alabama coach Nick Saban, who watched the quarterback account for 478 total yards of offense and four touchdowns in the Crimson Tide's 45-40 win over Clemson in last season's College Football Playoff National Championship Game.

"I don't have any input ... but after playing him last year, I'm voting for him, but I don't have a vote," Saban said. "I think he's a fantastic competitor and a great player and played a fantastic game against us."

Oklahoma wide receiver Dede Westbrook, who is also a Heisman finalist, won the Biletnikoff Award as the nation's best receiver. Westbrook was second in the Power 5 with 1,465 receiving yards off 74 catches. He also had 16 touchdowns, averaged 19.8 yards per catch, and 67.6 percent of his receptions went for first downs or touchdowns.

Peppers lost out to Alabama defensive end Jonathan Allen for the Chuck Bednarik Award for the defensive player of the year. Allen, the first Alabama player to win the award, already had won the Bronko Nagurski Trophy, another award given to the nation's top defensive player. Allen recorded 13 tackles for loss, 8.5 sacks, 15 quarterback hurries, and he led all defensive linemen with two defensive touchdowns.

Peppers played 15 positions in all three phases of the game for the Wolverines, recording three offensive touchdowns and a punt return for a touchdown. Defensively, he led the team with 16 tackles for loss and had four sacks, one interception and 72 tackles.

While Allen won't be in New York for the Heisman presentation, he's rooting for Peppers to win the bronze trophy.

"Represent for the defense," Allen said. "That's what I told him. I'm not bothered by [not being a Heisman finalist]. It's fine because I won the Nagurski Trophy. I'm perfectly fine with that. I won't lose any sleep over that."

USC cornerback Adoree' Jackson became the third straight junior to win the Jim Thorpe Award for the nation's best defensive back, while Texas's D'Onta Foreman became the third different winner from Texas (1997 and 1998 Ricky Williams, 2004 Cedric Benson) to win the Doak Walker Award for the nation's best running back. Foreman rushed for a nation-leading 2,028 yards this season.

Zane Gonzalez of Arizona State received the Lou Groza trophy as the top kicker, while the Ray Guy Award for best punter went to Utah's Mitch Wishnowsky, the latest in a wave of Australians who have revolutionized the position.

Pittsburgh running back James Conner earned with the Disney Spirit Award as most inspirational player for overcoming cancer.

In addition, Colorado's Mike MacIntyre was recognized as the previously announced winner of The Home Depot Coach of the Year Award, and retired coach Steve Spurrier received the Contributions to College Football Award.