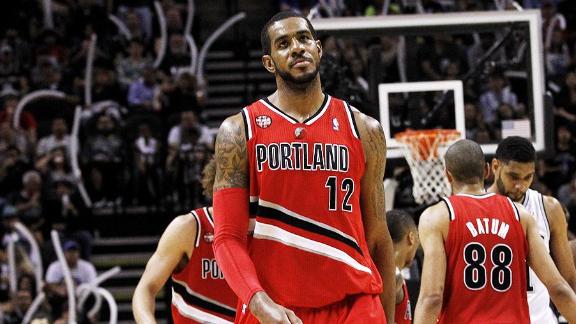 All-Star forward LaMarcus Aldridge has told the Portland Trail Blazers he won't sign a contract extension this offseason but plans to after the 2014-15 season, saying he wants to surpass Clyde Drexler as the franchise's greatest player.

"I'm happy to stay, happy to be here, happy with the direction the team has gone the last year or two," Aldridge told The Oregonian on Tuesday. "This has no impact on my interest in staying in Portland. I just want to get a five-year deal. I feel like that's the best decision on my part."

Aldridge, in the fifth and final year of a $65 million contract, is set to become a free agent next summer. The Oregonian reported that the Blazers offered a three-year, $55 million extension this offseason or that he could wait until next summer for a maximum five-year, $108 million contract extension.

Aldridge told The Oregonian that holding off extending his contract was what he termed a business decision.

"I don't want it to be perceived that I'm not happy or I'm not staying on because I'm not signing a three-year deal," he said. "It's just financially smarter to wait ... and I'm looking forward to signing the five-year deal when the chance comes."

Aldridge averaged a career-best 23.2 points and 11.1 rebounds last season for the Blazers, who went 54-28 and advanced to the Western Conference semifinals before losing to eventual NBA champion San Antonio.

There was talk last summer that Aldridge was interested in entertaining other contract offers, but as the season ended, he said several times that he was happy in Portland.

In the interview on Tuesday, Aldridge talked about how he wants to be the best player and go-to scorer that he can be for the Trail Blazers.

"I want to be the best Blazer -- ever. If I stay the rest of my career, I should be able to catch Clyde [Drexler] by then," Aldridge said of the Hall of Famer. "I should be able to leave a mark on a big-time franchise that is going to be seen forever. And I will be able to say I played here my whole career. This city has embraced me and grown with me. I have so much history, it just makes sense to stay."

The Blazers have been known in recent years to pull off NBA draft night surprises, but the team was quiet with no picks this year and was hoping to make news in offering Aldridge a maximum extension.

"The most important thing is everybody, including LaMarcus, knows he's the No. 1 priority in the organization right now," general manager Neil Olshey said when the season ended.