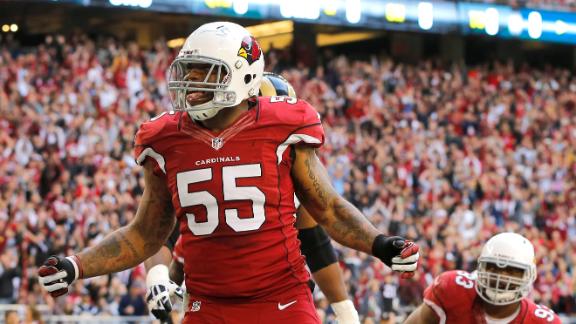 The NFL's active sacks leader said there were times during Monday night's 18-17 win over the San Diego Chargers that he "wasn't in it," Arians said, recalling their conversation. Abraham, who has taken a leave of absence from the Cardinals, left the game after the third play of the third quarter with a concussion and did not return.

It was the first reported concussion of Abraham's 15-year career, according to ESPN Stats & Information. Arians also said Abraham told him that this was his first concussion, although teammate Lorenzo Alexander cast doubt on that assertion.

Abraham, 36, is suffering from severe memory loss and has been for well more than a year, sources told ESPN NFL Insider Adam Schefter. Abraham believes he needs to take time to get well, Schefter reported.

"We mentioned the concussion but it was nothing as much as not being accountable to his teammates and having the full desire to play," Arians said. "I did not see the evidence of that. In his play, I thought he played his tail off."

Abraham entered the season No. 9 on the all-time sacks list with 133.5, eight behind friend Michael Strahan, who sits fifth. On Monday, Abraham didn't record a sack and didn't pressure San Diego quarterback Philip Rivers on any of his 19 pass rushes.

The Cardinals were granted a roster exemption as a result of Abraham's leave, which they used to re-sign linebacker Marcus Benard. Abraham has five days to decide if he wants to return to the Cardinals, or he won't be able to play for the Cardinals or any other team this season. In the meantime, Abraham will continue with the league's concussion protocol when it comes to resting and being asymptomatic, Arians said.

Sam Acho will start in place of Abraham if he doesn't return.

"I think with all the things that he has gone through in the last month, he has a lot of things outside of football that he has never dealt with before," Arians said. "There are some people that can help him in that regard. I'm not one of them.

"I'm not clinically smart enough to know what depression is and things like that," Arians added. "There are many issues that could be involved."

Arians said he didn't see a change in Abraham when he reported to training camp Aug. 14, almost three weeks late because he was in rehab, the result of being arrested June 29 and charged with drunken driving after he was found asleep behind the wheel of his car at an intersection in suburban Atlanta.

The Cardinals leave for New York on Friday, potentially forcing Abraham to make a decision in four days if he wants to make the trip, if he chooses to return to football.

"I think when you get to that age, and for whatever reason, if that game on 'Monday Night Football' and that atmosphere didn't have you flying around like always or more, then something is missing," Arians said. "That's basically what he reflected to me. He said, 'There were times in that game I wasn't in it, and that's not fair to my teammates. I've got to decide if this is what I still really want to do.'"

Information from ESPN NFL Insider Adam Schefter and The Associated Press was used in this report.