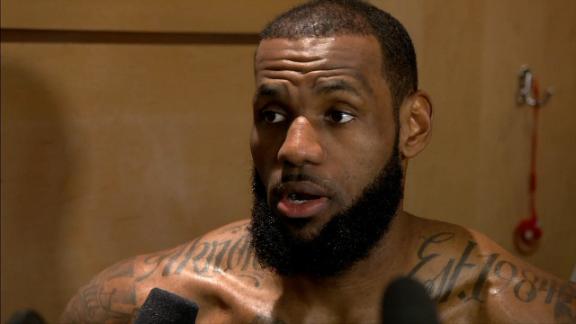 LeBron James reclaimed his kingdom in China from Stephen Curry -- arguably the most popular current NBA star in China -- in terms of jersey sales, according to the latest NBA China jersey and merchandise sales for the 2017-18 season.

Curry, whose Golden State Warriors reclaimed the Larry O'Brien Trophy over James and the Cleveland Cavaliers last season, had China's best-selling jersey a year ago.

Behind James and Curry this year were the Houston Rockets' James Harden (No. 3), the Warriors' Kevin Durant (No. 4) and the Boston Celtics' Kyrie Irving (No. 5).

While James, Curry and Durant are likewise top five in the latest release of jersey sales in the U.S., Harden (No. 10 in U.S.) and Irving (No. 12) found themselves more welcomed in China, thanks to the Rockets' long-lasting popularity stemming from Yao Ming and the immense attention surrounding the Celtics this season.

Kobe Bryant, who retired at the end of the 2015-16 season, finally dropped from the top ranks of jersey sales in China. Bryant and the Los Angeles Lakers were No. 1 on jersey and team merchandise lists at the beginning of 2017 and fell only to No. 2 by the end of last season. The retired Lakers legend has often been acknowledged as the most popular NBA player in China, but he wasn't in the top five this time. Los Angeles rookie Lonzo Ball (No. 11 in U.S.) is the Lakers' next best hope among Chinese fans.

LeBron on Warriors: 'You wanna play well against them'
LeBron James says he values the regular season matchups with the Warriors as a good way to see where they are at after facing them in 3 straight Finals.
Report a correction or typo
Related topics:
sportsespngolden state warriorsstephen curryjames hardenchinacleveland cavaliershouston rocketskevin durantkyrie irvingnbajersey saleslos angeles lakerslebron james
Copyright © 2020 ESPN Internet Ventures. All rights reserved.
More Videos
From CNN Newsource affiliates
TOP STORIES