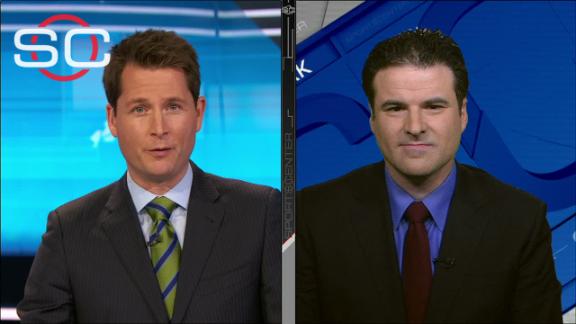 Nike has signed Cleveland Cavaliers forward LeBron James to a lifetime deal in what one source familiar with the negotiations said is the largest single-athlete guarantee in company history.

"We can confirm that we have agreed to a lifetime relationship with LeBron that provides significant value to our business, brand and shareholders," Nike said in a statement. "We have already built a strong LeBron business over the past 12 years, and we see the potential for this to continue to grow throughout his playing career and beyond."

A company spokesperson would not say how much Nike paid. It is believed to be the first lifetime deal in the shoe and apparel company's 44-year history.

"I'm very humble, man," James told reporters after Monday's practice. "It's been an unbelievable time for myself and my family, and I'm just grateful that Nike and [Nike founder] Phil Knight and everyone over there just believed in a skinny-old, skinny 18-year-old kid from Akron, Ohio, and I'm happy to be a part of such a great company."

"LeBron and I have been in love and obsessed with Nike since we were kids," Maverick Carter, James' business partner, said Monday. "Having built a totally innovative global business with them has truly been a dream come true. We are so excited to be taking the business to an entirely new level. For LeBron, he's thrilled to know he's a Nike guy for life."

James commented on his affinity for the brand, how important his first Nike deal was and what the new agreement means to him.

"It meant a lot to me even when I signed my first deal just to be with Nike, and it means even more that they've given me this," James said. "It's like I said, very humbling and grateful, and I'm going to continue to do my job and represent the brand the best way I can, like I know how. Hopefully, people see that."

Carter will manage the deal, which was negotiated by Main Street Advisors' Paul Wachter, who also negotiated the deal for John Henry to buy the Red Sox in 2002 and represented Beats By Dre in its $3 billion sale to Apple last May.

Although other companies have negotiated lifetime deals -- Adidas has structured them with Chicago Bullspoint guard Derrick Rose and soccer great David Beckham, while Reebok has a lifetime deal with former Philadelphia 76ers point guard Allen Iverson -- Nike has never announced a lifetime deal before.

It's assumed that Michael Jordan has at least a de facto agreement for life. Nike acknowledged to its investors in October that the Air Jordan brand, which began in 1985, had surpassed $2.2 billion in annual sales.

Nike has made more versions of James' shoe than for any other athlete outside of Jordan, who is on his 30th Air Jordan. Both James and Nike's business has grown exponentially since 2003, when Nike signed James on the eve of the NBA lottery to a seven-year, $90 million deal, its largest athlete deal ever at the time.

Nike has made 13 versions of James' signature shoe, and annual sales in 2015 for his line are estimated to top $400 million.

Sources told ESPN.com that Nike and LeBron's negotiating team had discussions as to whether they should break LeBron's line out from the Nike basketball umbrella, but ultimately, it was decided against.

"We've done a great job of building my brand to this point here today," James said. "We want to just continue it. If it makes sense for us to have a 'Team LeBron,' or whatever the name will be, we'll take a look at it and we'll go from there."

When Nike signed James, it had just come off $10.3 billion in annual sales and had its first year selling more products outside the U.S. than in the country. At an investor meeting in October, Nike, which pulled in $30.6 billion in revenues in 2015, announced its goal to do $50 billion by 2020.

As James was completing his final months on his first deal, Nike signed him in March 2010 to another nine years. This extension, one source said, will now take LeBron "way beyond his playing years."

Lately, James has been challenged by Golden State Warriors guard Stephen Curry in the marketing world, as the Warriors beat the Cavaliers in last year's NBA Finals. But Curry's business with Under Armour is still in its infancy, although sell-through of the Curry Two in stores has been very positive.

James' Nike business has been consistent even when things haven't gone smoothly. James didn't wear his LeBron 11 shoe for most of the 2013-14 season because of its fit, but the product still sold well at retail.

In recent years, James have evolved into more of a businessman. His equity stake in Beats earned him at least $30 million when the company sold to Apple, and he has territorial rights in Chicago and Miami to Blaze, a customizable pizza chain. Last week, he announced a $15.8 million investment from Time Warner and Turner in his multimedia athlete content platform called Uninterrupted.