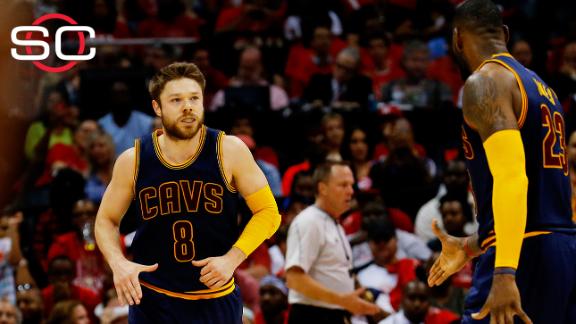 "I'm a little bit off about it because this is my guy, this is my teammate and this is a guy that goes out and works his tail off every single night and people are trying to give him a bad rap," James said while sharing the podium with Dellavedova following Cleveland's 114-111 overtime win over the Atlanta Hawks. "He doesn't deserve it and I don't like it."

Dellavedova got tangled up with Atlanta's Al Horford in the final minute of the second quarter of Game 3. As the two were boxing one another out, Dellavedova fell to the floor after tripping backward over Atlanta's DeMarre Carroll -- who was already on the floor -- and into Horford's right leg.

Horford responded to the contact by elbowing Dellavedova. Following a referee review, Horford was assessed a flagrant 2 foul and ejected and Dellavedova received a technical foul.

Referee Ken Mauer, the crew chief for the game, told a pool reporter Horford received a flagrant 2 because, "He made contact above the shoulders, to the shoulder and head area, of Dellavedova."

As for Dellavedova's technical, Mauer explained: "We felt that he made contact with his head and shoulders into the knee area of Horford. So we ruled that a live-ball physical taunt technical foul."

The play came a game after Dellavedova collided with Atlanta's Kyle Korverwhile pursuing a loose ball in the third quarter of Cleveland's 94-82 win, causing a season-ending high right ankle sprain for Korver.

"I saw the ball [on the play with Korver]. I dived on the floor," Dellavedova explained after Game 3. "If I stay on my belly, it's going to be a jump ball. So I protect the ball and kick it out to a teammate."

James was thorough in explaining why he believed Dellavedova was in the right on both plays.

"Well, you just play the game the right way," James said. "At this point, you try to do whatever it takes to win. You don't want to hurt nobody. No one, I think, in our league goes around trying to hurt people. But you don't take the aggressive nature out of the game.

"And there's no difference between me boxing out, or Al Horford boxing me out and Delly boxing someone out. That is a fundamental box out. That's all it is. And we all know that. We don't never want to play with the integrity of the game and try to get people hurt. That's not what it's about. Because we all want brotherhood at the end of the day, an NBA family. But you play to win the game and you play aggressively. That's what it's about."

Dellavedova said that the play in question began with the Hawks' All-Star big man fouling him.

"I'm boxing him out," Dellavedova said. "He's pulling my left arm down. I'm trying to stay up and he's just pulling me down. I mean, the tape's there."

In Game 5 of the Eastern Conference semifinals against Chicago, Dellavedova was involved in another controversial tie-up with the Bulls' Taj Gibson, which resulted in Gibson being ejected after being assessed a flagrant 2 foul.

The play occurred when Dellavedova tried to box out Gibson and Gibson shoved Dellavedova in the back, making him fall to the floor. While on the floor, Dellavedova squeezed both of his legs around one of Gibson's feet, prompting the Bulls big man to kick him.

Dellavedova was later assessed a technical foul by the league for his involvement.

James said that there was another play in the Cavs-Hawks series that didn't get nearly as much attention, but was just as harmful.

"In Game 2, when [Pero] Antictwo-hand shoves me out of the air," James said, referring to the flagrant 1 foul Antic was called for against James in the first quarter of Game 2. "I mean, the fact that I'm still playing, we don't talk about it, but he two-hand shoves me in the air. So, what are we really talking about? Are we going to talk about us trying to win basketball games or about those guys trying to figure out a way to [prove] that Matthew Dellavedova is this type of [dirty player]? This guy, he works his tail off every single day. He beats the odds and he comes to play as hard as he can every single night. If they're focused on Delly, then they're focused on the wrong thing."

"I see it as Delly being one of those guys that doesn't stop working," Shumpert said. "He's not going to stop boxing out. He's not going to stop until he sees that we have the possession. A guy like that, it can get under your skin and it causes guys to have reactions of wanting to fight back or throw a quick jab at him and it's natural in games like this, it's high-intensity, very emotional. Nobody wants to get undercut, nobody wants anything like that to happen, but if you can see the play, Delly is just trying to box out, falls off balance, guy is tangled in his arms and he falls into Al's knee. I don't think that once he sees the tape, I don't think Al's going to be mad about that."

Added Jones: "I think sometimes, because it's uncommon for guys to go out there and lay it on the line every single possession in every facet of the game, it's kind of shocking at first. But you look at it, Delly is that guy that's boxing out. ... He's down there fighting amongst the trees and he gets no credit, no love, but we know how valuable that is to us and we respect him."