LeBron James will be free agent July 1, according to sources 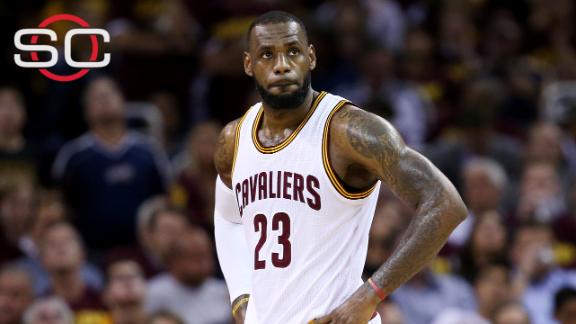 LeBron James will bypass his $21.6 million player option with the Cleveland Cavaliers and become a free agent on July 1, sources told ESPN.com.

The move, which was expected, marks the third time in the past six years that James will be an unrestricted free agent. This time is expected to have a different outcome, as James intends to re-sign with his current team, sources said.

James also does not plan to meet with other teams, sources told ESPN's Chris Broussard.

Last week, Cavs general manager David Griffin said the team had been in regular contact with James since the end of the Finals and that he was "very engaged" in discussions about the roster. Sources told ESPN, however, it is James' intention to stay somewhat removed from the Cavs' free agency until other free agents are handled.

James' agent Rich Paul also represents Cavs restricted free agent Tristan Thompson. Paul has made it known his first priority in free agency will be getting Thompson a deal. After a strong postseason, Thompson is expected to command a contract worth more than $13 million per year. The Cavs have full matching rights and intend to re-sign Thompson.

James is also likely to see how Kevin Love's free agency plays out before finalizing a deal. The Cavs are confident they will be able to re-sign Love and have been since they traded for him in August. Though they cannot formally make an offer until Wednesday, sources say that the Cavs for months have planned to extend a five-year, maximum contract for Love in excess of $110 million despite his shoulder and back injuries last season.

Love may speak to other teams next week, but there is a growing belief across the league that he will back up statements made throughout the season and return to the Cavs. Several sources close to Love have indicated he is likely to stay in Cleveland.

On Sunday, in fact, Love and James were spotted huddling at a hotel pool in Los Angeles, though sources insisted the meeting was not about free-agent matters.

During this past season, at times Love consulted with teammates on whether he should lock into a long-term deal this summer or look for a shorter deal.

Even as they may have to handle Love, Thompson and perhaps restricted free agent Iman Shumpert before sitting down with James, the Cavs are expected to quickly reach out to James and offer him a maximum contract of up to four years on Wednesday.

While the team does not have salary-cap space or own James' Bird rights, it is able to offer him a contract up to the max of around $22 million per year under league rules. James is expected to eventually repeat his actions of last July and sign a one-year contract with a player option for the 2016-17 season that will allow him to become a free agent again next summer when the salary cap and max salaries take a jump.