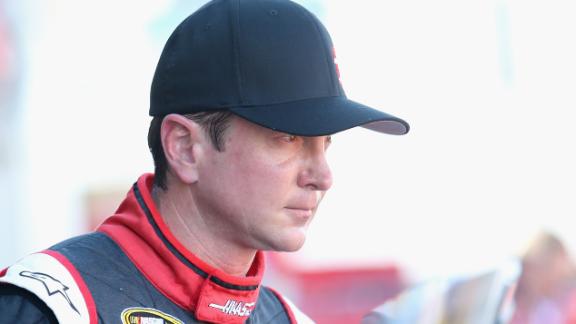 ESPN
WhileKurt Busch"vehemently" denies allegations of domestic assault, a Californialegislator wants NASCAR to suspend the Sprint Cup driver until the matter is resolved, according to a report.

SI.com reported Friday that Rep. Jackie Speier sent a letter to NASCAR president Mike Helton and to Stewart-Haas Racing saying she was "disappointed to see that NASCAR and Stewart-Haas Racing have not taken any action. Your response to these serious allegations has been totally inadequate."

She also calls for NASCAR to "adopt a policy going forward in all domestic violence cases to suspend drivers until criminal proceedings end or there is a clear lack of evidence."

Patricia Driscoll, Busch's ex-girlfriend,has accused Busch of domestic assault, and police in Delaware are still investigating an incident that allegedly occurred inside Busch's motorhome at Dover International Speedway on Sept. 26.

Busch has not yet been arrested or charged with any crime.

In the letter obtained by SI.com, Speier also takes issue with NASCAR not suspendingTravis Kvapilin 2013 after domestic violence allegationssurfaced, saying "it calls into question the enforcement policies exercised by NASCAR."

Driscoll has filed court documents asking a judge to order Busch to stay away from her and not contact her. She claims Busch verbally and physically abused her and smashed her head against a wall three times.

Dover Police Department officials told SI.com that Busch has yet to be interviewed by authorities.

Gene Haas, the co-owner of Stewart-Haas Racing along with driverTony Stewart, saidlast Sunday that "there's two sides to every story," and that he did not consider removing the 2004 Sprint Cup champion from the car during the investigation.

NASCAR has rules covering inappropriate or criminal behavior away from arenas, but it does not have a policy addressing domestic violence on its own. The rule book has a section covering violations and disciplinary action, including penalties that can be determined "by the gravity of the violation and its effect on ... the interests of stock car racing and NASCAR."

Busch's attorney, Rusty Hardin, has said Busch "vehemently" denies the allegations and that Driscoll's accounts are "a complete fabrication by a woman who has refused to accept the end of a relationship."

The NASCAR Sprint Cup season concludes this weekend with the Ford EcoBoost 400 at Homestead-Miami Speedway.